Profiles of Graduates: Trey Flint eyes a career in baseball

The mantra “do what you love” is seared into the minds of high schoolers looking to determine their path. Recent graduate Trey Flint managed to live it out when he committed to play the game he loves at a school that feels like home. 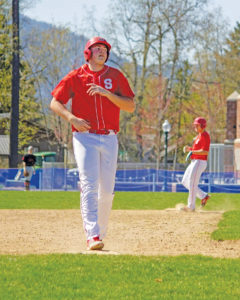 “I’m so excited for four more years of baseball,” Flint said. “Everything just came together perfectly.”

Flint is set to play first base at McPherson College, a private, liberal arts university in Kansas.

Flint had been forging this path for years throughout his high school baseball career by communicating with college coaches and coordinating visits. Last summer, Flint and his family visited each of the 10 schools that he had received offers from.

“It was hard, because I really wasn’t able to cross any of them off, because they were all so great, and all of the coaches were all so nice,” Flint said.

At that point, McPherson College wasn’t a priority in his mind. He had received a phone call from their baseball coach a few months prior.

“I really didn’t think anything of it. I was like, ‘OK, it’s in Kansas, I’m not going to go there, I’ll find something closer to home.’”

His tune changed when he visited the campus. Flint was struck by how much the school and surrounding community reminded him of home.

“It was weird, because it reminded me of Sandpoint, because it’s a small town, their colors are red and white and they’re the bulldogs, and I really liked it there,” he said. “I’m excited about it just because I feel like I’m going so far away that I’m going to need a little bit of home with me.”

Flint’s tour of McPherson ended on a high note over lunch with his new coach.

“We went to the cafeteria, and it was an all-you-can-eat buffet, and he got me in for free, so I was a big fan. He won me over with food, and then we were sitting there talking, and then he offered me a scholarship.”

McPherson wasn’t the only school that offered Flint scholarships, but its familiarity and kind staff set it apart from his other options.

“Between baseball, academic and local scholarships, I got my entire tuition almost paid for,” Flint said. “I ended up choosing them because it felt the most like home, I liked it the best and I got a really good scholarship.”

Flint plans to study business management with a minor in finance or accounting, but he hopes to play baseball for as long as possible.

“Professional baseball player has always been the end goal. It’s going to be really hard, and I don’t know if I’ll make it, but I’ll try my best to,” he said.

Flint also aspires to work in a business management role for a professional sports team.

Flint’s senior season was a notable one for Sandpoint baseball: The boys beat Lakeland in a three-game series to earn their spot in the state tournament, breaking an 11-year hiatus.

“This year, everyone just bought in more and wanted it more. We decided we were talented enough to go to state, and we were tired of not going, so I think we just worked harder,” he remembered.

Flint described the district championship game against Lakeland as his favorite baseball memory ever.

“That was the most people I’ve ever seen come out for a baseball game in Sandpoint, ever. It was so cool,” he said. “I spiked the ball super hard cause I was just so excited, and we all got hyped and dog piled.”