Visitors to the Pend d’Oreille Bay Trail in recent weeks have been puzzled to see the trailhead closed. Located just to the north of the Seasons at Sandpoint condo development and immediately south of the city’s wastewater treatment plant, the parking lot and public trail access point have been operating under limited hours since May 3, “until further notice,” according to a Facebook post by the city of Sandpoint.

The trailhead parking lot is shut down to accommodate “construction unloading and staging at the adjacent Seasons condo build and to protect public safety and emergency access,” Sandpoint City Manager Jennifer Stapleton told the Reader in an email. 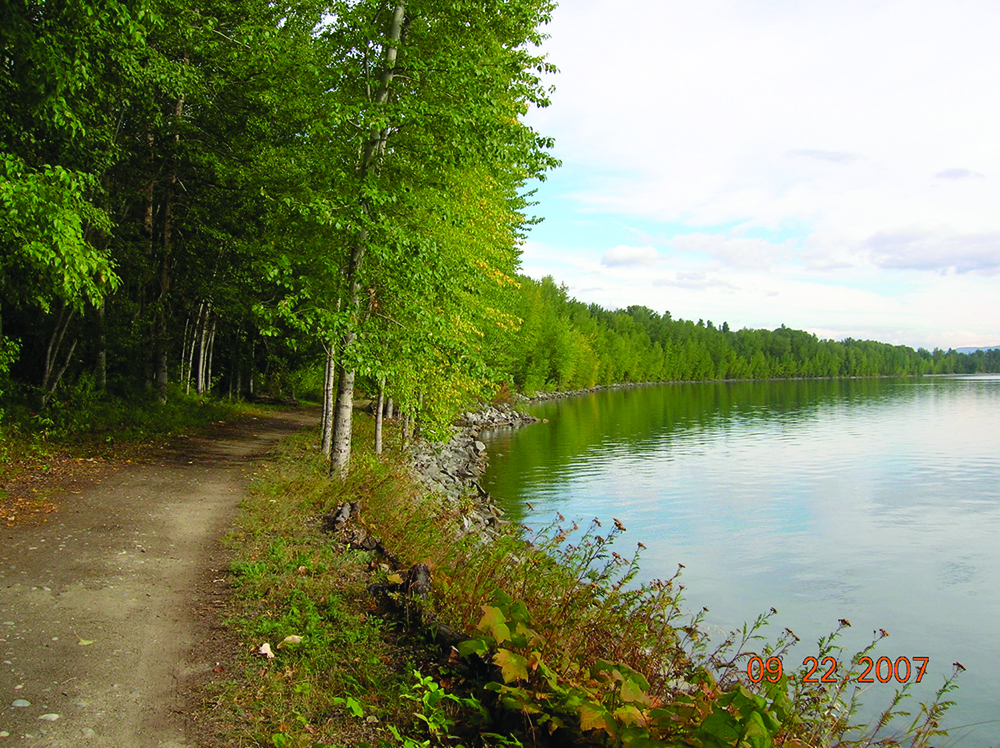 Access at the parking lot is closed Monday-Thursday from 6 a.m. to 4 p.m. and Fridays from 6 a.m. to noon; yet, “The trail will remain open to pedestrians, bicyclists and their dogs at all times,” the city stated.

Meanwhile, those wishing to use the trail — which proceeds one-and-a-half miles along the shoreline from the former Humbird Mill site in Sandpoint to a piece of private property adjacent to Ponderay city limits — must park at Dock Street and City Beach, then walk or bike to the trailhead.

Stapleton said the reason for the limited trailhead hours stems from the Seasons build, which requires ample space for heavy equipment and worker parking — both of which had been impeding emergency access to the treatment plant when parked on the street.

“The developer originally tried to perform all loading/unloading and staging in the private street next to the development so as not to impact the parking lot, but ultimately this created a greater public safety issue,” Stapleton wrote. “We need a 20-foot drive lane for emergency vehicle access to the trail and the city water treatment plant and pedestrians were walking through the unloading area, which created a significant safety hazard.

“Our priority is to ensure that the trail remains open to pedestrians, bicyclists and their dogs at all times and can be safely accessed,” she added.

Seasons at Sandpoint General Manager Scott Olpin said trail users should expect the limited trailhead hours to continue through the summer, and noted that, “the city was the one that approached the builder” about using the city-owned POB Trail parking lot for construction staging — “It wasn’t a Seasons decision,” he said.

Meanwhile, those wishing to access the trail are asked to use the marked walking path on the west side of Sandpoint Avenue.

“We would really prefer that the folks who are commuting from City Beach would take that path,” Olpin said. “That walking path begins essentially in front of Best Western and goes north all the way to the parking lot right at the trailhead.”

Olpin underscored that those making their way from the beach to the trail should exercise “extreme caution,” as well as some patience, as heavy machinery moves up and down Sandpoint Avenue amid the construction, which will result in a five-story building (including four floors of residential space and a rooftop swimming pool) — a project 16 years in the making.

“Obviously we don’t want anybody to be hurt or inconvenienced — especially not hurt,” he said. “We would also encourage them not to park on Seasons property, because it is private property. … You wouldn’t want anyone parking in your driveway.”

Overall, Olpin added, trail users are asked to “be patient, be neighborly.”

Friends of the Pend d’Oreille Bay Trail in a May 18 post on Facebook reported the results of a meeting with Stapleton, in which the group stated that, “It could be a few months before the parking lot at the Sandpoint trailhead is open during the weekdays again.”

As Stapleton said, the Friends cited “the lack of space along the city street to accommodate both large delivery trucks and emergency vehicles in the event of a fire or other emergencies at the city water treatment plant,” as the reason for the closure.

“We are disappointed and recognize that this is extremely inconvenient for many, especially those who have physical challenges,” the Friends wrote. “In addition, we have received reports of trail users encountering hazardous conditions when passing through the parking lot during construction hours. Please take care!”

According to the Friends’ statement, “we hope to focus city attention on improving the trailhead parking and access situation. We will continue to advocate for the expanded parking plan in our Master Trail Plan, which would involve converting the grassy swale inside the water treatment plant fence to parking and treating stormwater underground.

“This is an expensive, but feasible option,” the Friends added. “We also would like to see if we can work with the city and condominium developer to shift pedestrian use to a sidewalk along the condominium complex, instead of in the bike path on the street.”

Friends of the Pend d’Oreille Bay Trail encouraged trail users to email the group at [email protected] with any questions, concerns or general thoughts on the access situation. Likewise, citizens are invited to provide feedback via the city’s Engage Sandpoint online portal: sandpointidaho.gov/your-government/engagesandpoint.