Ultrarunning: Not for the faint of heart

You’ve heard of 5K and 10K races. You’ve seen people run half-marathons and marathons. But there’s a more elite category of running that makes these shorter distances seem like just walks in the park. I’m talking about ultrarunning, and one Sandpoint couple recently completed the coveted 100-mile ultramarathon and lived to tell the tale.

Katie and Gwen Adams aren’t your usual married couple. Katie grew up in Sandpoint and graduated in 2007. She met her future husband Gwen while traveling in Australia in 2012 when they were both volunteering for a nonprofit organization called Sea Shepherd Conservation Society that aimed to curtail illegal whaling practices. 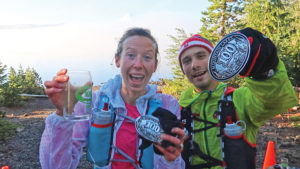 “I always wanted to fight for what was right,” said Gwen. “I was in the French Army, but I realized what I was fighting for wasn’t what I believe in.”

In one instance, the Sea Shepherd ship attempted to prevent an illegal refueling of a tanker and factory whaling ship – weighing in at 5,000 and 8,000 tons respectively – while their ship was a modest 500 tons. This occurred in the frigid waters of the South Atlantic not far from Antarctica.

“They got really upset and tried to go through with it,” said Gwen. “They rammed our ship. Inside, you saw paint cracking. This ship ten times our size was pushing us over.”

“Our captain had to call in a mayday,” said Katie. “It was really scary. But we ended up saving 935 whales.”

It was during the long, droll days at sea for three months, with the portholes shut because of rough weather, that Katie and Gwen read a book that would change their lives.

“We read a book called ‘Born to Run’,” said Katie. “It will inspire anyone to run for the first time.”

The book, penned by Christopher McDougall, features a story about the reclusive Tarahumara Native Mexican tribe in the Mexican Copper Canyons who were known for their ability to run distances of over 100 miles at incredible speeds without getting the routine injuries that plague most American runners.

“I didn’t know people ran more than a marathon,” said Katie. “While we were in Antarctica, we just decided, let’s run an ultramarathon – the most extreme opposite than being stuck in a boat for three months.”

Katie and Gwen began running as a way to get off the ship and explore further away from port.

“Then it just occurred to us,” said Katie. “What we really love is the mountains. We wanted to find a place to live that was a trail runners’ paradise.”

That “paradise” happened to be Katie’s hometown of Sandpoint. The couple moved back to help her father remodel her childhood home. The plan is to eventually market the place as a trailrunning bed and breakfast.

Soon, the two set their sights on the granddaddy of running feats: the 100-miler. Gwen ran his first 100-miler in July, but Katie’s first attempt took place in Oregon just three weeks ago at the Mountain Lakes 100.

The 100-mile trail is actually a portion of the Pacific Crest Trail and features 12,000 feet of combined elevation gain over the 100 miles.

That’s where Gwen stepped in with some wisdom: “The most important part of running is the mental part. No matter how well trained you are, you’re going to hurt so bad. You’re going to question whether you’ll be able to finish. It’s part of the process. Focus on if you can move right now, not the fact that you have 18 miles to go.”

When the race kicked off, Katie said she was optimistic about finishing in under 24 hours, which is a benchmark with 100-mile races. Then at mile-19, she started having stomach issues and had to slow to a walk.

“I thought I was going to pass out, throw up, faint,” she said. “I didn’t understand what was happening and had to walk for awhile.”

Luckily, the section she had trouble was an incline with deep snow, so most of the field had slowed to a walk. In fact, the first 30 miles of the trail was under 6-8 inches of snow. Finally, the nausea passed and Katie hit her stride again.

In the final seven miles, Katie and Gwen realized their pace would put them over the 24-hour mark for finishing, so they picked up the pace.

“The last three miles, we were running at the speed we’d run if a lion were chasing us,” said Gwen.

“That last hour was the most demanding thing I’ve ever done,” said Katie. “It was so relieving to reach the finish line.”

The pair finished 100 miles in just under 24 hours – 23 hours, 56 minutes to be exact. Katie ended up placing second of all the women who raced, a feat her and Gwen were especially proud of.

While the first finishers were young, the front of the field was filled with runners in their 40s and 50s.

“That’s the really cool thing about ultrarunning,” said Katie. “You don’t reach your peak until your 40s.”

The race took a toll on Katie’s body, however. After the race, she sat in the warming tent and realized she couldn’t get up. When she stood to accept her award, she found it was difficult to walk. The next day, she woke and saw her knee was the size of a grapefruit.

“It took five days for the swelling to go down,” she said. “I wasn’t trained to run that far – if you do the right training, that doesn’t happen.”

Now that the 100-miler is in the bag, the couple have set their sights on a new goal: running the entire Pacific NW Trail from Glacier National Park to Seattle. The 1,200 mile trail hugs the border of Canada, passing just north of Bonners Ferry.

“We want to be the first people to run it,” said Katie. “Through hikers do it in 50-60 days, but we’ll try for 30 miles a day and finish in under 40 days. That’s a big thing in the ultrarunning world: fastest known times.”

While Katie and Gwen’s goals help balance their lives, they both say an additional goal is to inspire others, too.

“Doing these unknown things is a microcosm of life,” said Katie. “We want to see what we’re capable of and push our own limits, but our aim is to inspire other people.”

“That’s how you really learn about yourself,” added Gwen.

The couple have begun documenting their experiences in film, hoping to gain the attention of a professional documentary filmmaker. They are also passionate about eating a plant-based diet, offering tips for a healthy lifestyle on their website.

“Our passion isn’t about running, but being outside, pushing ourselves,” said Gwen. “When you’re in comfortable situations, it’s easy to pretend you are someone else, but when everything becomes uncomfortable, you are the real you.”