News recently surfaced that Alabama Senate candidate Roy Moore, who was just endorsed by the Republican National Committee, has ties to Vision Forum, a now-defunct, politically-involved ministry that put forth the idea that Old Testament law should be followed in U.S. courts. This viewpoint is defined as theonomy. The irony is that these laws can be indistinguishable from Sharia laws on the same subjects, particularly where they pertain to rape and molestation. 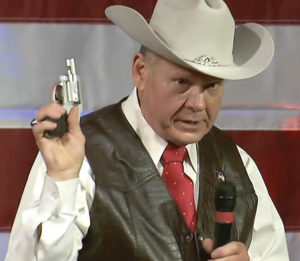 Roy Moore shows off his firearm at a rally last month. Photo courtesy of YouTube.

Way before he made news for allegedly touching and harassing underage women, I heard about Moore through Vision Forum. As a conservative homeschooler, I got their catalogues; I also read and watched a reasonable cross-section of their media. My first cousins authored several Vision Forum products, such as a video called “Return of the Daughters” featuring “visionary” women who dared to stay at home through adulthood to serve their fathers and wait for a husband, rather than attending college or even partaking in missions trips. My cousins were stars of the “stay-at-home daughters” movement that took Vision Forum’s men-as-spiritual-leaders mantra quite literally. They believed women should remain under constant male protection and direction their entire lives — first from their fathers, and then from their husbands — to prevent atrocities such as molestation or marrying a guy whose theology wasn’t perfect. Among other concepts pulled directly from the Old Testament, they proposed that husbands should present wives’ fathers with a “bride price” when they married.

The burden of protecting females in this paradigm is placed on parents as well as the female herself. The implication is that molestation is about what you’d expect if you allow women out from under the protection of their fathers. In their view, it’s not abnormal for men to lust after teenage girls; that’s just the natural order of things. Hence all that need for male protection.

Vision Forum evaporated in 2014 when its leader, Doug Phillips, admitted to an “inappropriate” relationship with a woman. The woman in question turned out to be a “stay-at-home daughter” featured in my cousins’ film; she subsequently alleged in a lawsuit that Phillips repeatedly sexually assaulted and harassed her while she was living with his family and taking care of his children.

Vision Forum has sold several products co-authored by Moore or that referenced his views on law. Moore also spoke at Vision Forum conferences, such as the Witherspoon School of Law and Public Policy. Additionally, he was featured in a glowing documentary that aired at Vision Forum’s San Antonio Independent Christian Film Festival and was created by theonomist and Georgia Republican 11th District State Committeeman Nathaniel Darnell.

Currently, across his social media pages, Darnell staunchly defends Moore using Old Testament law, which he believes should be the legal standard in courtrooms as well as everywhere else. Regarding Moore’s accusers, Darnell specified that in order to be morally and legally viable, “God’s Law requires ‘two or three witnesses’ to any (molestation) accusation.” He elaborated that this did not apply to women saying the same kind of thing happened to all of them; instead, the Old Testament requires “an eye-witness to the same identical occasion with the same identical people at the same identical time.”

There are cases where this requirement for in-person witnesses has been applied to rape accusations in courts of law, but they have taken place in countries using Islamic law, such as Dubai. If such laws were to be applied in the United States, for any reason, they would match up with the specter of Sharia law feared by some conservatives.

In fact, if I were ever to hatch a diabolical plot to impose Sharia law on the United States, I would attempt to do so through the back door of theonomy. As we have seen, even the President of the United States does not shy away from endorsing a man who has been booted out of the courtroom for attempting to enact Old Testament standards. Whether Moore himself is a theonomist is debatable; at the very least, he has a deep fondness for theonomists and believes that homosexuality should be illegal because it is illegal in the Bible.

When Moore told Fox’s Sean Hannity that he never dated girls without their mother’s permission, this was the context. There is never a minimum age for marriage or courtship in Old Testament law. However, you are supposed to obtain her parents’ permission.

Katie Botkin has a master’s degree in English and is the managing editor of MultiLingual magazine, which ships to 87 countries.