Sexual harassment is a complex issue… and it isn’t

Sexual harassment: It’s an issue too complex for a 30 second news bite. But I also think the issue is simpler than some of the coverage suggests.

One NPR commentator recently said: “This important story … has done so much to make us recast how we think about sexual interactions in the workplace.” 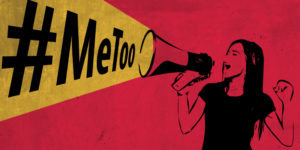 Hold on, who is confused? Maybe we need more female commentators on this story. The repeated narratives coming to light of women being serially harassed, molested and raped have NOT caused us to rethink sexual interactions in the workplace.

It’s simpler than that. These stories have caused us to prosecute sexual predators previously deemed “too big to fail.”

These stories are about what it means to be female in America. They’re also about the terrible things we are capable of doing to other humans when we think we are above the law. Above reality. Too big to fail. I’d like to say I would never take advantage of another human being if I was in a power position, but I don’t think that is something I can know. This in no way excuses the deplorable actions of sexual predators. But it shows us something both about the corrupting nature of power and of the disenfranchisement of women.

I am one of the lucky women who has not been raped. But no woman escapes sexual harassment at school and at work. It happened to me with the “I want to have your baby” remark slung from older boys at school. It happened again when a male department head asked me to plug something in under his desk for him while he watched. I have been there. Ladies, we have all been there in one form or another. But let me be the first to say that these experiences are not the same. These stories are not the same, and we have to be careful not to equate them.

At the same time NPR severs ties with Garrison Keillor for touching a woman’s back, Roy Moore may be voted into office after being accused of kidnapping teenagers and trying to rape them in his car while he was in his 30s. One news story basically equated Garrison Keillor’s treatment by NPR to NBC’s firing of Matt Lauer, who is accused of locking women in his office and raping them until they passed out. That is not the same thing. We must remain a society that holds people innocent until proven guilty. And we must at the same time stand up for and stand on the side of women who have been victimized by men in power. We can do both of these things.

One example is Al Franken, who was accused by one woman of being creepy and sexual when she was sleeping on a plane. Mr. Franken then apologized and asked for an ethics investigation to determine if he should step down. This kind of response makes it possible for us to reconcile ourselves with both the reality of the victims and the reality of the accused. I know women who have been raped (and so do you, I promise), and I know men who have been falsely accused of sexual assault. We can’t become mobs with pitchforks trying to annihilate anyone who has ever been accused of misconduct. Neither can we allow sexual predators use their wealth and power to abuse women.

It’s not a scary time to be a man. It’s a scary time to be a sexual predator. We are creating this mass revelation by, for the first time in modern history, believing the victims. We are standing on the side of those who have been hurt and humiliated, some of them for their whole lives, by men who decided they could just “grab (us) by the pussy.”

I am the facilitator of a local community organization. As the allegations of sexual assault and harassment began to dominate the news, I sent out a personal message to my members, and I extend it here to you. If you have been the victim of sexual violence, I stand by you. I believe you. You are not alone. Your stories are heralding a revolution, and finally bringing the truth to light.