7B: A history of your favorite county

Who would’ve thought a simple county designator code on a license plate could become a right of passage for locals across the state? 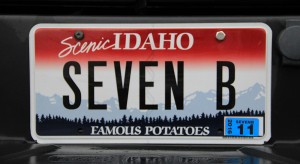 In 1945, Idaho began using the system still in use today. Not a whole lot of folks outside of Idaho understand (or care) what those little codes on the license plates mean—7B, 1A, K, et. al.—but to those of us who live here in the Gem State, they refer not just to the county in which our cars are licensed, but where we hang our hats.

“It just means local to me,” said Lenny Hess, owner of 7BTV in Sandpoint. “I spent a lot of time thinking about what to call this business venture, and when I saw a few other businesses that were starting to pop up with 7B in the name, I liked it.”

“I wanted the name to be more of a local town feel,” said Cody Torgerson, who owns 7B Floors with his wife Eva. “It’s already branded so well.”

When 7B Boardshop owner Rory Whitney had to name his business, he found the decision a tough one.

“That was the first thing we were really struggling with,” said Whitney. “There weren’t really any local businesses with that name yet, and I wanted to portray the locals, not just Sandpoint, but the Sandpoint area. 7B is all about local pride, and we’re a shop who cares about it.”

When 7B Fitness owners Jenny and Matt Mire took over the Sandpoint gym last year, it was important to exemplify the hometown values they believe in as Sandpoint natives.

“We thought, since we each grew up here and graduated in Sandpoint, that the gym deserved a name that is all about local,” said Mire. “I think people understand the underlying meaning of 7B, which is about taking care of each other and being friendly.”

When David Marx, owner of 7B Skis in Sandpoint, saw bumper stickers that read “I SKI 7B,” he thought it was a great way to market to locals.

“The name actually made great sense to me,” said Marx. “With my first model, I was creating a ski specifically for skiing the side-country off of Schweitzer. And to this day, all the skis are made right here in Sandpoint. I feel the moniker has grown into a great way to let people know you are truly a local business … It also keeps you grounded in the community. I mean how are you going to market or explain your 7B name if your business grows out of the area but is not based here?”

Others around the area have embraced the 7B phenomenon in their own ways. Justin Schuck of Idagon Homes put “SEVEN B” on his plate as a way to best his father, Forrest. 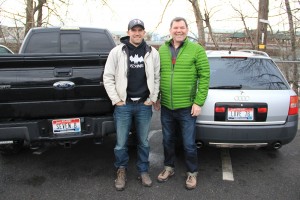 From left to right, Justin and Forrest Schuck stand proudly before their 7B license plates. Photo by Ben Olson.

“My dad put “LOVE 7B” on his plate,” said Schuck. “It’s often difficult to outwit him. So, I needed to do that with the opportunity … by getting “SEVEN B” registered in my name. Two points for me.”

“We have tremendous pride in our region,” Schuck continued. “It feels great to tell people where we are from and be able to smile about it. The 7B is somewhat of a brand, a cool brand that only locals know about.”

It all started with a man named Edward L. Bonner (you might see his name printed as “Edwin,” but that is because of a 112-year-old typo that is still cited).

In 1863, Bonner, along with cousin Richard Eddy and friend John Walton, joined thousands of prospectors who flooded into the area after large amounts of gold were discovered in the East Kootenais of British Columbia. The path they followed was known as the Wildhorse Trail.

The three men were headed north to the gold strikes, but when they arrived at where the Wildhourse Trail crossed the Kootenai River, Bonner realized it was an excellent place to build a ferry. Prior to this, the Native Americans would row prospectors over the river by canoe. Bonner bought the land on both sides of the river from the Kootenai Chief Abraham, and the location became known as Bonner’s Ferry (the apostrophe has since been dropped, as it has become an abominable U.S. policy to drop apostrophes in place names). 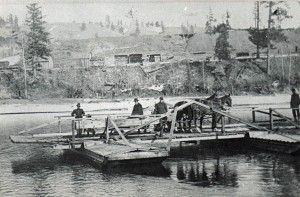 Bonner’s time in North Idaho was relatively short-lived, however.

“Edward had a trading post at Walla Walla, and him and Richard went back for supplies and they left John Walton, who was the one who actually operated the ferry,” said Sue Kemmis, curator at the Boundary County Museum. “How they got the name Bonner instead of Walton, who knows? We could’ve been called Walton’s Ferry.”

After his return to the ferry, Bonner soon moved onto Montana, where he opened Bonner Mercantile and dabbled in politics until his death in 1902. His total time spent in North Idaho was probably no more than a few months.

Richard Fry bought the ferry and trading post in 1875 and applied for the first U.S. Post Office. The town was officially called Fry, Idaho until 1899 when it was incorporated and the name was changed to Bonners Ferry.

The entire landmass of North Idaho was originally included in Kootenai County until Bonner County broke off in 1907.

“Then in 1915, Boundary broke off from Bonner,” said Kemmis. “We were called Boundary because we’re bounded by two states and a foreign country. So far as we know, we’re the only county in the nation that can say that.”

It is curious why Boundary County changed names instead of Bonner County.

“Mostly it’s just pretty silly that we ended up being Bonner County,” said Cameron Murray of the Bonner County Historical Museum. “It would have made more sense to rename the lower half when they split, but apparently the legality of moving a county seat is tricky and Sandpoint had been designated as the Bonner County seat.”

What it means to be a local

People who live in beautiful places like to share inside secrets with one another. To be a “local” means something different for everyone. It could mean that a bartender knows your name and what you drink, or that you can’t get through the grocery store without stopping to gab with acquaintances.

For me, being local is a state of mind just as it is a circumstance of geography. I’ve lived and worked all over the country, yet I keep ending up back in Sandpoint where I was born and raised. Life just makes more sense here. Does it mean I can’t hack it in the real world? Probably. It also means that I haven’t found anywhere as special as North Idaho in which to spend my precious days.

7B is all of that and more. 7B is just a number and a letter smashed together, but to get what 7B really means, you have to spend some time here in Bonner County. You have to talk with the old timers who were here before you, and to the newcomers that are drawn here for various reasons of their own. Somewhere along the line, they all crossed the Long Bridge for the first time and felt the magic we all feel daily.

I can sum it up best with an experience I had in Los Angeles one day while I was still working in the film industry. I never changed my license plate to a California plate, mainly because my friends back home would’ve disowned me, so I still rocked the 7B on my old clunker.

I was on the Pacific Coast Highway outside of Santa Monica, stopped at a red light. Suddenly a car zoomed up beside me and honked, making the universal “roll down the window” sign. Used to L.A. traffic and the crazies that roam the roads, I warily rolled my passenger window down and expected an onslaught of profanity because of a traffic faux pas I must’ve pulled.

Instead, an attractive woman in her thirties smiled at me and said, “7B! Sandpoint!”

“I grew up in Garfield Bay,” she said. “Glad to see a sane face down here.”

The light turned green and we both zoomed away to our lives. I never did figure out who she was, but I’m sure if we had a few more moments to talk, we would’ve figured out some people we knew in common. In a city full of people who refuse to look you in the eye, we made instant friends over a license plate, over a letter and a number.

Both the Bonner and Boundary County History Museums helped provide information for this article.