Trapping regulations are back in the public eye after a Clark Fork woman’s dog was injured by a wolf trap.

Mary Franzel was cross-country skiing just off the side of Lightning Creek Road earlier this month when her dog, Morgan, had her foot caught in a baited wolf trap. According to the Idaho Department of Fish and Game, the trap was legally set and maintained. Idaho requires traps to be set at a minimum five-foot remove from a maintained public trail. 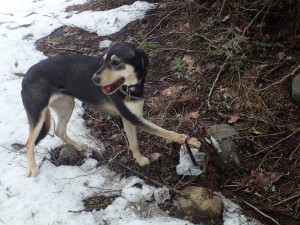 Franzel’s dog Morgan with his paw caught in the trap. Photo by Mary Franzel.

Morgan wasn’t seriously hurt in the incident. However, Franzel is urging Idaho Fish and Game to reexamine its trapping oversight, which lately has emphasized education over stricter regulation. She argues that five feet isn’t sufficient space to protect pets and pet owners.

“This way, I cannot even take my dog on a public trail with a [long leash,]” she said.

This isn’t the first time Franzel has dealt with dogs being hurt in traps. However, she stresses that the answer isn’t to be confrontational with the trappers. The problem of pets being caught in traps hurts trappers, because it costs them time to reset and rebait the mechanisms.

“The trapper [in this incident] was a really nice guy,” she said. “He talked to me about this before any of this got out.”