The importance of LGBT equality in Sandpoint

I want you to try something for a moment. Look in the mirror and tell me what you see. In my case, I see a man. In yours, you might see a woman, a girl, a boy, an elderly male. But what if you looked in that mirror and saw someone completely different staring back at you—a man, a boy, a girl, an elderly woman? What would you do then?

It’s a question Kayden Brower knows all about. But he’s still seeking answers. You see, Brower was born a woman, but is now living as a man.

Living in North Idaho has its pros and cons. We are surrounded by the splendor of nature. Small town life is close, intimate, compassionate. You can generally count on people to treat you fairly, to help you out if you’re in a bind. 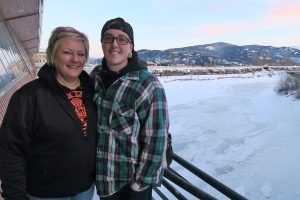 The flip side of the coin is that small town life sometimes gets stagnant. We often feel as if we’re insulated from the harsh realities of the world. We aren’t regularly exposed to different cultures and beliefs. When someone comes along that is different, we may tend to ostracize them rather than understand them.

It’s the sheltered mentality that many are drawn to when moving to North Idaho. What many people don’t realize is that there are cultural variances everywhere, including our little shire in the mountains. It just seems as if we don’t know they’re there in fear of sharing too much information with a small audience.

Brower grew up somewhere between Priest River and Sandpoint. From as far back as he can remember, he felt something was different about him.

“I didn’t feel like I was in the right body,” he said. “I didn’t do the things that other girls did. I felt different from all the other kids.”

Growing up as a tomboy, Brower said that he tried to do the “girl thing” with long hair and makeup for about a year, but it fell short.

“I always thought she was just a tomboy,” said Brower’s mother Mitze Thompson. “To be honest, I didn’t know anything was different about her until she came out as being gay.”

Thompson said her first reaction was to do some research to learn more about how she could communicate with her daughter. Both said that they have a very close relationship.

“We’ve always been best friends,” said Brower. “We tell each other everything. I always felt I was a straight male. I didn’t feel like I was a female. A lot of people didn’t understand that.”

As you might imagine, Brower characterized his high school years as a time of struggle.

“It was not a good time,” he said. “I just wanted to be happy with myself and love myself. But there were a lot of dark moments. A lot of self-hatred, self-mutilation, even attempted suicide.”

In high school, young Kayden began cutting herself: “It was an addiction, like a drug. I’d cut myself and feel better. I’d feel a release.”

Thompson said most people were accepting when they learned about her daughter who had come out as a lesbian, but there were some low moments.

“We lived in a small community, but people have their own opinions,” she said. “Some of those people were not so nice, but I choose to have positive people in my life.”

Brower said he always felt made fun of, and that he was judged constantly

Brower’s lowest point came when he was 18 and had to be institutionalized. Brower told his father he needed to get help or he was going to kill himself. He had just had a toxic relationship with an abusive woman end and had cut himself badly in the bathroom.

“I hated everything because I hated myself,” said Brower.

Brower spent a week recovering, and was prescribed anti-depression medication. It wasn’t until five months ago that he started to take testosterone pills to facilitate the transition into becoming a man.

Thompson said she remembers the moment when she finally began to understand how her daughter was now becoming her son.

“When she told me, ‘When I look in the mirror, I don’t see a female, I see a male,’ well, it finally made sense to me. I got it,” said Thompson. “Most parents who have transgender kids are nervous. They’re scared because they think it’s a phase.”

“It’s not a phase,” said Brower. “Getting piercings and dying your hair is a phase. Trust me, nobody chooses this lifestyle.”

After entering therapy and coming to terms with the idea that he was really a man inside, Brower began to feel better about himself. He continued to see his therapist, Eric Ridgway, who had been a positive influence on him from early on.

“Eric has known our family since Kayden was young,” said Thompson.

“He was the best counselor I ever had,” said Brower. “He was always real with me. He touches you on a personal level, and really cares about you.”

Though Brower still swings into a funk from time to time he said he has more control over it now: “I can pull myself out of it.”

“It’s like I feel like me now,” he said. “I was so emotional before the hormones, now I’m better. I can handle this.”

“His voice is deeper,” said Thompson, when asked what she notices different about her son. “I can tell that he is more comfortable with who he is. He’s even growing a little bit of facial hair.”

Brower smiled and felt the scruff on his chin. He grinned like a proud teenager.

For mother and son, the fact that Brower is a transgender male is not something to raise a fuss about anymore. They have been through the hard stuff, and have grown closer through adversity. But still, for both of them, they are sometimes disappointed by the resistance that people show toward the LGBT community.

“What drives me crazy is that the first thing everybody always thinks of is sex,” said Thompson. “Why do we go right to the sex thing all the time? We all live in a glass house. We are all judgmental. But why does it make a difference what someone does in their bedroom? My son is happy and full of love. That’s what matters.”

“We are all humans,” said Brower. “We all have souls. It just makes me sad when people judge me. I’m an amazing person!”

Brower now lives in North Dakota, where he moved after not being able to find work in North Idaho. He currently lives with his fiancé, a woman who knew him back in school.

“After I came out, everyone was really supportive,” said Brower. “She knew me before. She didn’t judge me on my gender or whatever, it was the connection that we had together. She’s really a great person.”

In the opening days of state legislatures around the nation, more so-called “bathroom bills” began popping up. Texas, Kentucky, Virginia, Missouri and Minnesota all introduced the controversial bills that continue to stoke the debate over rights of transgender individuals.

At least 24 states have considered “bathroom bills” since 2013, according to the National Conference of State Legislatures.

A prime example is North Carolina’s House Bill 2, which effectively banned people from using public bathrooms that don’t correspond to their biological sex as listed on their birth certificates. Proponents believe it to be common sense legislation. Opponents describe it as the most anti-LGBT legislation in the U.S.

Since it passed almost a year ago, the issue has undoubtedly caused the state’s economy to suffer after a spate of music performers refused to play concerts in opposition of the bill. Also, several key businesses made a public stand to cancel plans that would benefit North Carolina’s economy and workforce. The NBA even chose to move its All-Star Game from Charlotte to New Orleans in opposition to the bill.

When asked what restroom he uses, Brower shrugged and said: “I guess it depends on where I’m at. It’s not a big deal.”

Brower’s ultimate hope is that people will stop being so angry and start accepting their neighbors with more love in their hearts.

“I just want to be accepted in the world for who I am,” he said. “I want us to listen more. I want us to be proactive instead of reactive.”

Thompson has become active with Sandpoint PFLAG (Parents and Friends of Lesbians and Gays), and urges those in the community to reach out to friends, to the internet, to anyone who will help them understand how to treat each other fairly.

Through opening lines of communication to lay bare the truth about transgender individuals, Thompson hopes we’ll realize that we’re all unique and that we’re all the same on the inside.

That’s where it matters most.

“We’re afraid of what we don’t know,” she said.