Scott, Woodward, McDonald, Bradshaw among winners; Scotchman gets thumbs down

Voters in the Idaho primary elections showed a strong independent streak even within their parties as they voted Tuesday for a mix of incumbents and challengers – a trend in both local Bonner County races as well as state offices. 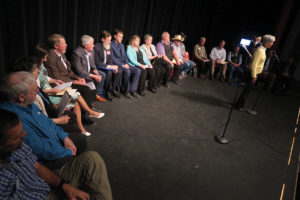 2018 primary candidates at a forum sponsored by the Reader, SandpointOnline and KRFY 88.5 FM. Photo by Ben Olson.

In the most closely contested statewide race, in the five-way Republican primary for Lieutenant Governor, Janice McGeachin received 51,079 votes for 28.9 percent, little more than 1.5 percent ahead of Steve Yates, who received 48,221 votes for 27.3 percent. Get complete state election results for all offices at Idaho Votes.

That this election was of high interest among Bonner County voters was reflected in the turnout. A total 11,100 residents voted – marking nearly a 50% voter turnout and a whopping 60.9 percent increase over the last primary election. In the 2016 primary election, there were 6899 total votes cast of 22,152 registered voters.

Following are results for contested Bonner County races; these are unofficial results until canvassed.

Bradshaw will face Democrat Patricia Wentworth, who was unopposed and received 1593 votes:

McDonald will face Democrat Steve Lockwood, who was unopposed and received 1608 votes.

Following are results for races for District 1 Legislature, which includes Boundary and most of Bonner County.

Click to see or download a complete breakdown of voting in Bonner County by precinct for all races, including state races, uncontested races and precinct committee chairs: Bonner County primary results.