The Sandpoint Eater: After the harvest

There was no time to linger over my last sip of summer sangria before it was time to gather the last of my garden’s bounty. I don’t know about you, but I was ready to say goodbye to that unforgiving heat and the drought-like days. But gosh, summer ended so abruptly and with a giant exclamation point! Threat of frost sent us out in force to glean the last of our gardens, and now we’re busy canning, drying and freezing the fruits of summer’s labor.

Besides preserving my harvest, I’ve been thinking about the Christmas baking (really!) that needs time to age (with liberal baths of alcohol), like plum pudding and the ever-traditional fruitcake. Friend or foe of the fruitcake, everyone has an opinion (and no one’s shy about sharing theirs). Personally, I think this cake gets a bad rap.  Something that’s been served up at every royal wedding for centuries can’t be that bad. The oldest recipe dates to Roman times and included pomegranate seeds, pine nuts and raisins, which were all mixed into barley mash. Honey, spices and preserved fruits were added during the middle ages, and love it or loathe it, we’ve been baking it ever since.

I first became aware of the fruitcake during my Catholic school education. For reasons that are still unclear to me, some of the most prized fruitcakes were (and still are) baked by brothers in ancient monasteries and nuns who baked theirs in silence, cloistered in convents. Each holiday season our own order of nuns, The Sisters of Charity of Leavenworth, would rally the students, then with promises of great prizes for the top salespeople, we’d hit the streets, order forms in hand. The grand prizes always eluded me, but I still have a large collection of holy cards, perpetual proof of my devoted endeavors.

Every country has its own version and legend of provenance. There’s Italian Panettone, the German Stollen, in France they nibble on Gâteau aux fruits, and our sensible Canadian neighbors simply call theirs the Christmas Cake. The recipes are all similar, many handed down for generations, though modern offspring don’t seem nearly as enthused with this timeless treat. In my collection of antique and vintage cookbooks, the older the cookbook the more fruitcake recipes, with versions of soft, white, dark and wedding fruitcakes. By the ‘70s, fruitcake recipes began to wane, and in many of my contemporary books, it barely receives a nod.

For many years, my family had a fruitcake that made an annual appearance in the Christmas gift exchange. Sadly, my clan didn’t take it seriously enough, and with total disregard to tradition, that old cake disappeared. A family in Michigan took better care of theirs, and the great-grandson of the baker presented a slice of their 125-year-old heirloom to Jay Leno, who bravely sampled a bite on his talk show.

For others, with disdain for this legendary baked confection, you might consider the Great Fruitcake Toss of Manitou Springs, Colo. Each year, during the first week of January, the mockers gather to see who can hurl theirs the furthest for the grand prize (not to mention great admiration from like-minded peers).

Now, for those of you who were afraid this column would end with a fruitcake recipe, you’ve been spared (for now). Recipes require pictures of finished product and I’m still gathering ingredients to whip up my colossal batch. You can plan ahead too: Miller’s Country Store has a great array of candied fruits and other ingredients to get your fruitcakes in the oven.

Besides, before I can even begin to think about Christmas baking, I’ve got to deal with the plethora of apples I’ve been given. Apples are the new zucchini–it seems everyone enjoyed a bumper crop and can’t give them away fast enough. Besides applesauce and fritters, I’ve been baking pies, tarts and galettes, which are all quite similar, depending on the pan (pie pan, tart pan, or even free-form on parchment paper and cookie sheet for a rustic tart). My favorite, when I have time to fuss with the apples, is a beautiful tart, with thin sliced apples in a pretty design.  You don’t have to fuss with apples for this week’s tart, it’s fairly easy and a great finish to any dinner.

But do remember, there will be a fruitcake (recipe) in your future.

the pastry shell with egg white, then

and 1 tbs water to brush over tart just 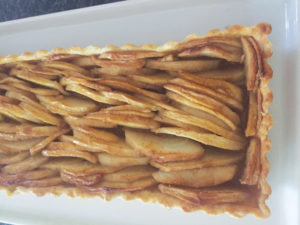 Flatten each into disk. Wrap each in plastic; chill 2 hours. (Can be made a day ahead. Keep chilled. Let dough soften slightly before rolling out.)

Preheat the oven to 400 degrees.

Roll the dough slightly larger than the pan you are using, pat into place in pan, trim edges (or flute/crimp) and refrigerate while you prepare the apples.

Peel and core the apples and cut them in half. Slice the apples crosswise into thin slices.

Brush the shell with egg white, sprinkle lightly with 1 tbs sugar, then arrange the apples slices in the pan and continue making rows until the pastry is covered with apple slices (pat the apples down, they’ll be crowded, but they shrink during baking) Sprinkle with the 1/2 cup of sugar and dot with the butter.  Brush the apples and crust with the egg wash.

Bake for 45 minutes to 1 hour, until the pastry is browned and the edges of the apples are brown. When the tart’s done, heat the apricot jelly together with the Calvados or rum and brush the apples and the pastry completely with the jelly mixture. Loosen the tart with a metal spatula so it doesn’t stick to the pan (or paper). Allow to cool and serve warm or at room temperature.