Wheeler asked to return the money — obtained in two resolutions totaling almost $28,500 to cover “COVID mitigation” — after Bonner County Clerk Mike Rosedale pointed out a condition in the U.S. Treasury Department’s guidelines for ARPA funds stating that recipients of the federal money must agree “to comply with all other applicable federal statutes, regulations, and executive orders, and Recipient shall provide for such compliance by other parties in any agreements it enters into with other parties relating to this award.”

In a phone call with the Reader following the nearly two-hour commissioner meeting, the clerk said that the specific mention of executive orders is the “great unknown” — noting a possible nationwide vaccine mandate as a hypothetical. 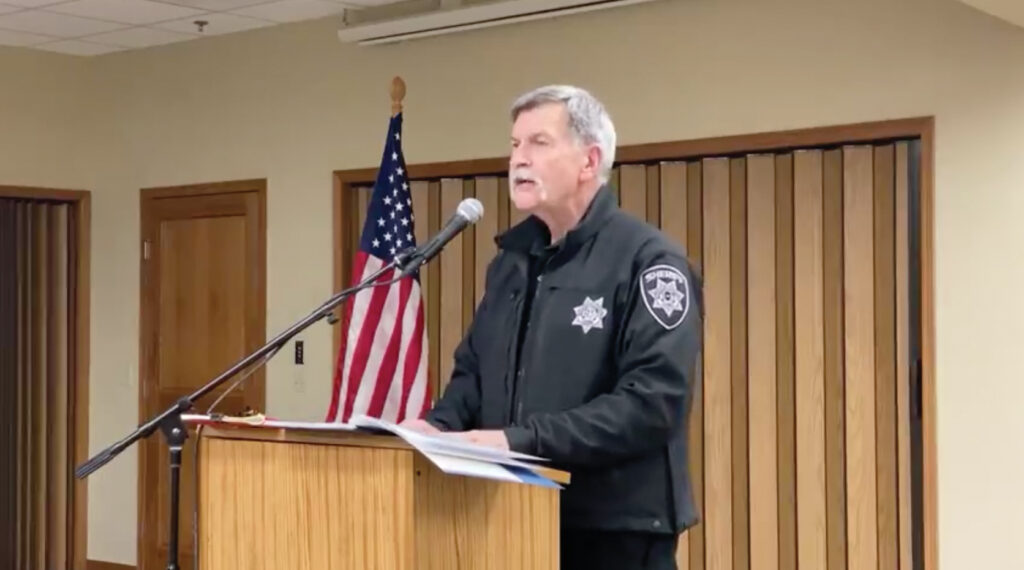 “That’s what’s causing [us] pause,” Rosedale said. “You just want to know what you’re getting into when you sign a contract, especially when almost $9 million is on the line.”

In an email following the board’s approval to remove the funds from his office’s budget, Wheeler explained his concerns further, sharing that he “cannot and will not” comply with “federal statutes, regulations and executive orders,” as the Treasury’s rule dictates.

This is the first case of an Idaho sheriff refusing the Rescue funds, according to Idaho Sheriffs’ Association Executive Director Jeff Lavey.

“We have not heard about this in our state with any Sheriff’s Office until you mentioned Bonner County today,” Lavey told the Reader in an email on Nov. 2. “All Idaho Sheriffs are independently elected and operate on what they feel is best for their county. The Idaho Sheriffs’ Association does not have any statutory authority to oversee and/or review what an independently elected Sheriff has chosen to do in their county.”

Commissioners shared that the county’s legal team is currently reviewing the Treasury Department’s guidelines attached to the ARPA funding, which is generally limited to covering expenses incurred due to the ongoing novel coronavirus pandemic.

“We’re waiting to find out from legal, after they do the research, where this stands. The three commissioners passed a resolution … that we would obviously stand against the Biden administration,” said Commissioner Dan McDonald, referencing a resolution passed Oct. 22 securing the county’s stance against mandates, specifically relating to vaccines or masks. “But before we make the decision to not use any more of the money, we want to make sure that legal has a chance to give us an opinion.”

Bonner County EMS requested and received roughly $800,000 for its 2021 and 2022 budgets in September, meant to mitigate lost income while first responders treated patients at home rather than transporting them by ambulance to the overcrowded hospital. Chief Jeff Lindsey also told the Reader in September that the ARPA funds would help pay for the inflated cost of medical supplies, automated CPR machines and UVC disinfecting lights for ambulances.

If the “strings attached” — as Wheeler called them — are deemed inappropriate by county legal officials, McDonald said Bonner County will refuse its share of the ARPA funds and write a check for the ARPA funds it has already spent.

“If it does come back that, yes, it does tie our hands to a degree, then we will certainly give it all back. That’s a nonissue for us,” he added. “That being said, if it doesn’t, then we are going to want to use this [money] because it is your money, and our money.”

When asked whether he’d be asking taxpayers to make up the difference now apparent in his budget, Wheeler said no. To account for some of the ARPA money Wheeler returned, he also presented a resolution to move nearly $18,500 from his office’s salaries budget — meant to pay for jail positions “currently not filled” — to a separate line item “to cover the unanticipated costs of cleaning supplies.” Commissioners also unanimously approved this request.

During that discussion, Wheeler rhetorically asked the room “how much is your freedom worth?” Rosedale chimed in to state that he’d be willing, as a taxpayer, to pay more in taxes to avoid depending on federal funds with conditions attached.

“As Daryl said, I would much rather pay it than be beholden to the federal government, especially executive orders from that fellow — Brandon,” Rosedale said, evoking laughs and cheers of “Let’s go, Brandon” from the crowded meeting room, referring to a now-viral moment at a NASCAR race during which a sportscaster mistook the crowd’s chants of “F*ck you, Biden” for “Let’s go, Brandon.”

The Nov. 2 meeting drew a packed audience, with several attendees using the public comment period to commend Wheeler’s retroactive refusal of the ARPA funds. Many denounced the fact that Bonner County accepts any federal funds at all, and suggested the county “live within its means” without that money — a concept that commissioners pointed out would make operating the county nearly impossible.

“I want to clarify that this area, these rural areas, have survived on federal money for a long, long time,” Commissioner Jeff Connolly said in response to a commenter who lauded North Idaho for being a “beacon of freedom” that’s “not awash in federal money.”

McDonald said that once the county’s legal counsel is able to form an opinion on the guidelines and conditions of using the ARPA funds, the board would notify the public and likely discuss the issue further at future meetings.