The primary election Tuesday night was nothing less than momentous in its impact, dealing fundamental changes to several offices and a serious blow to wilderness efforts in the Scotchman Peaks Idaho region. 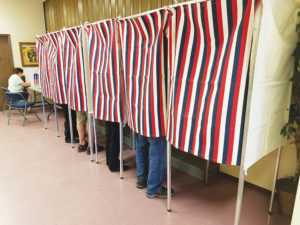 Voters cast their ballots at the VFW Hall polling station in Sandpoint. Photo by Cameron Rasmusson.

“The vote shows a large number of Bonner County primary voters value wilderness,” he said. “The depth and breadth of this support shows that wilderness and conservation values are important to a significant number of people.”

“The board and staff of FSPW thank all the volunteers and supporters and members of the public who have stood up and voted for wilderness values,” he said. “We will continue working to preserve the Scotchman Peaks for future generations through ongoing advocacy, on-the-ground stewardship and education.”

After opposition to the Scotchman Peaks Wilderness proposal mobilized in 2017, Risch announced this year that he would honor the result of the Bonner County advisory vote. True to his word, Risch announced Wednesday that he intends to abandon the bill.

“I will not reintroduce the Scotchman Peaks legislation,” he said in a statement. “I thank those who have been involved in educating the community on the proposal, and I applaud the Bonner County Commissioners for bringing the proposal to me and allowing Idahoans to voice their opinion on this important issue.”

The Scotchman Peaks advisory vote helped drive turnout in what proved to be an extremely busy primary election. According to Bonner County Clerk Michael Rosedale, 11,100 voters turned out to cast their ballots, representing nearly half the registered voter base.

“I want to thank poll workers for a fantastic job, and Bonner County voters for voting,” Rosedale said. “We had a great turnout.”

Scotchman Peaks wasn’t the only shake up at the county level. County Commissioner Glen Bailey failed to win the Republican nomination for the general election, losing to Steven Bradshaw, pastor of the Cocolalla Cowboy Church, in a 2,946-to-3,607 vote. A third candidate, Bruce Hollett, took 764 votes. Bradshaw will face Democrat Patricia Wentworth in the general election.

John Mitchell will remain District 1 judge following an election against Douglas Pierce, which he won in a 4,762-to-2,953 vote. 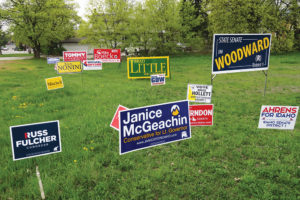 State and national races yielded dramatic results on election night as well. A hard-fought and often contentious gubernatorial race between Tommy Ahlquist, Raul Labrador and Brad Little ended with Little securing a victory 72,518-vote victory against Ahlquist’s 50,977 votes and Labrador’s 63,460 votes. Ahlquist positioned himself as a political outsider and businessman, while Labrador relied on his support from Idaho’s deeply conservative voters built over his time in the U.S. Congress. Little, by comparison, emerged as a more moderate alternative to his competitors.

The Democratic gubernatorial race was just as eventful, with Paulette Jordan earning national attention for her bid to become Idaho’s first female governor and the nation’s first Native American governor. Riding a wave of populist support, Jordan handily won her race against the more establishment Democrat A.J. Balukoff in a 38,483-to-26,403 vote.