The Bonner County no-wake zone regulation is being extended to 500 feet on all waterways starting now in response to flood threats.

The Board of Bonner County Commissioners voted unanimously Tuesday to extend the no-wake zone from 200 to 500 feet after a recommendation from the Bonner County Sheriff’s Office Marine Division. 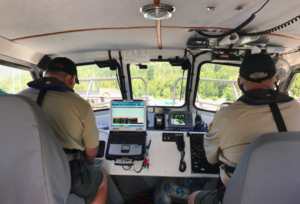 Marine deputies patrol the lake in the summer of 2017. Photo by Lyndsie Kiebert.

“The recommendation is due to threat to life and property in Bonner County as the result of snowmelt, warming temperatures and rain resulting in flooding,” Commissioner Glen Bailey read from the sheriff’s office’s statement.

The statement said that the extension will be in effect until said threats are no longer an issue. At that time, the commissioners will pass another vote during their regular Tuesday business meeting to return the no-wake zones back to 200 feet from the shore.

Assessor Jerry Clemons asked whether the regulation change was in response to the county’s recent push to find solutions to widespread waterfront property damage due to wakes.

“That’s a different issue,” Bailey clarified. “This has to do with flooding and damage to property from that.”