Panida opens its doors to Bozeman Film Festival of Shorts

The Panida Theater has been dark for the duration of the coronavirus pandemic, but the marquee will again light up for the first event in more than two months Saturday, June 13 with the Bozeman Film Festival of Shorts. 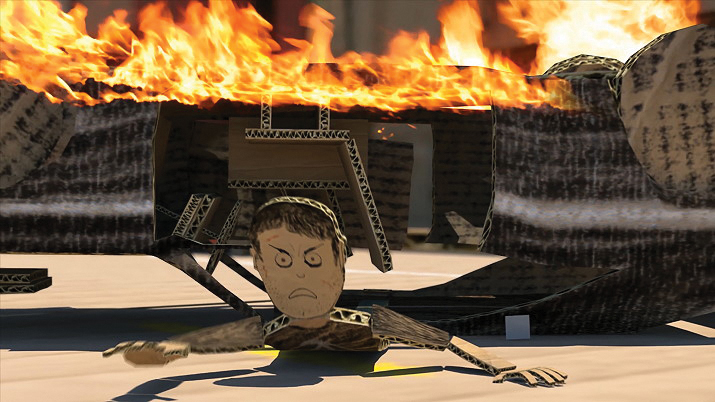 A still frame from ‘Fire in the Cardboard City,’ one of the 17 short films showing at the Bozeman Film Festival of Shorts at the Panida Theater on June 13. Courtesy image.

Featuring a collection of 17 short films that celebrate independent filmmaking, creative expression, and emerging and established voices, the festival specializes in films that educate, encourage and inspire audiences to get involved and take action to protect our planet.

Part of the Bozeman International Film Festival, the screening will kick off with a 45-minute block of short films starting at 7:30 p.m. After an intermission, the second portion of the evening will commence with another 45 minutes of films.

The films vary widely, from animated to live-action shorts. Among the offerings, Fire in the Cardboard City is a critically acclaimed animated short The New Yorker called “a mini disaster movie that feels like a joyride.”

Horns Out features 77-year-old Montana climber Maurice Horn asking existential questions about sense of place, identity and mortality, while Granbad is a short film about a dyslexic boy who inadvertently shows a bully that it isn’t “soppy” to love your grandpa and like spending time with him.

In Girls Section, a quiet revolution is growing in remote northern Pakistan as girls in the region, for the first time, are challenging tradition for their right to go to school.

The Panida will be practicing social distancing during the event, asking patrons to enter through the left front door and the newly arranged concession stand.

Panida Executive Director Patricia Walker said patrons will then move down the left aisle, “where patrons will see every other row has been marked off.”

After the films, patrons will then exit up the right-side aisle and stay left to exit the theater out of the front entrance.

“We will be posting the normal signs of, ‘If you’re sick, don’t come in please,’ and will show the six-foot marks to begin with and believe and hope that our clientele understands and honors the requested rules of helping each other remain healthy,” Walker said.