Construction work unearthed rooms beneath the Abbott Block – but what is their history?

When Heather Upton, interim director of the Bonner County History Museum, received a tip that secret rooms had been uncovered beneath the Abbott Building on First Avenue in Sandpoint, she responded as most history lovers would: with excitement and curiosity.

Workers excavate the “secret” rooms under the Abbott Building during demolition after the Feb. 2019 fire. Photo by Carrie Logan.

“I immediately thought, ‘Oh, secret rooms — there [was] amazing, nefarious things going on down there,’” Upton said with a laugh.

As it turns out, Upton was likely on to something.

The Abbott Building — located at the corner of First Avenue and Bridge Street — suffered from a large fire in February 2019. The structure has since been torn down, and amid cleanup and renovation, a series of underground rooms came to light.

According to research from local historian Dan Evans, newspapers of the time painted a clear picture that the rooms beneath the Abbott Building and neighboring Walker Building — which were connected by an underground hallway — comprised an illicit gambling hub in early Sandpoint.

One story, from December 1915, detailed a gembling raid in which sheriff’s deputies guarded escape routes and cut phone lines while breaking up a gambling ring beneath the Walker Store. One gambler is reported to have escaped out the back of the building by sliding down a drain pipe and “vaulting across” Sand Creek, “evidently too frightened to think of warning the First Street resorts, thinking only of making good on his own escape.”

Workers excavate the “secret” rooms under the Abbott Building during demolition after the Feb. 2019 fire. Photo by Carrie Logan.

In 1924, an article titled “Officers Raid Gambling Den,” recounted how law enforcement found “gambling going on full blast, about $80 being on the table in the game.”

Local historian Nancy Foster Renk is also well versed in the many iterations of the Abbott Block. Aside from the known gambling that took place in the basement, Renk said the space once served as a meeting place for the Sandpoint chapter of the Industrial Workers of the World or “Wobblies” — the organized labor group responsible for the local 1917 lumber strikes. The governor of Idaho at the time, Moses Alexander, even met with IWW members in the Abbott basement.

As far as other purposes for the mysterious underground rooms, Renk said anyone’s guess is as good as hers.

“They certainly could have been [used] to hide booze during Prohibition or for some other illicit purpose,” she said. “On the other hand, they could have a much more prosaic use.” 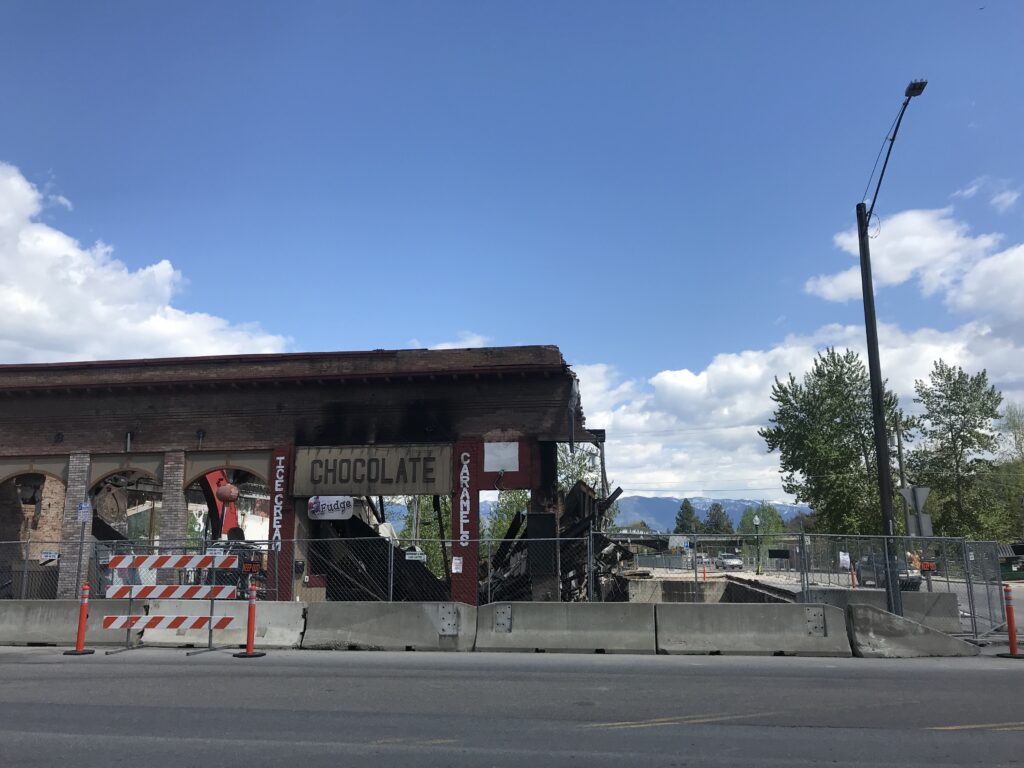 The Abbott Building on First Avenue and Bridge Street after the fire. Photo by Lyndsie Kiebert.

Based on the well-documented bootlegging and corruption happening in Sandpoint at the time — including the 1923 conviction of Bonner County Sheriff William Kirkpatrick for seizing and reselling more than 100 cases of bootleg whiskey — Evans said that “the basement rooms in the Walker and Abbott blocks were no doubt a location involved in the drinking of bootleg liquor.”

“You know that those rooms were involved in that,” Evans told the Reader, “[but] it’s hard to say why they built them in the first place.”

Why build hidden, underground rooms? Perhaps a more direct question: Why not? If anything, history buffs a century later itching for a glimpse of early Sandpoint will have a great time musing about the building’s wild past. Plus, discoveries like this remind Upton why preserving Bonner County history is not only important, but also a lot of fun.

“We can’t renovate these rooms, but we can document them and make them a part of our history,” she said.