Absentmindedly spooning another mound of sugar into my Peruvian Americano, I looked out the cafe window into Cusco’s central plaza. 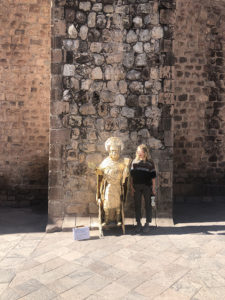 Emily with “Inca Man” in Peru.

There were two large cathedrals towering like bookends on the stone-cobbled square, and as it seems Peruvians don’t start their days until after 8 a.m., the Monday morning bustle had yet to begin.

Inside the cafe, an acoustic string rendition of “Dancing Queen” tinkled over the radio, and the vastly overstaffed servers rattled off rapid Spanish, far too fast for my 102 level Español comprehension to grasp.

As if following ABBA’s crescendo, the traffic outside began to build, with commuters flooding into the plaza to catch cars and busses, weaving their way between friendly city dogs scrounging for morning scraps.

Tourists soon joined the mix, adding to the cacophony, with oversized maps and rain ponchos under their arms, batting off teenage panhandlers hawking “original art” like flies.

A sunburnt, middle-aged couple raced through the square, eyes fixed on an old woman in traditional Andean garb. She was holding a baby alpaca and charging S/1.00 for a photo.

The sunburnt woman squealed with delight as the baby alpaca nibbled on her finger, and her husband rapidly captured each of her and the old woman’s angles with his camera.

As someone who can spot a tourist trap from a mile away, I couldn’t help but chuckle at the couple. They had ran right into it, head first. Suckers.

Still smirking in my all-knowingness, I caught a glimpse of a man tucked in shadows of one of the cathedrals. He was struggling to pull on vibrantly gold tights, hopping on one foot as the synthetic legging stretched over the other.

Over his tights, he pulled on a shiny, yellow tunic and a golden spray-painted chainmail skirt. Completing the ensemble was a gold mask and crown, and a painted lawn chair throne. In a matter of 10 minutes, he had transformed from a slightly overweight, balding 50-something into “Inca Man.”

I watched, transfixed, as he hauled his throne to the center of the stone wall and perched upon it, sun gleaming off of his shiny attire. And as he sat, still in the middle of all the chaos, I couldn’t help but see the world through his eyes.

I wondered at all the circumstances that lead him to purchase a can of gold spray paint and tights, and what it would feel like to watch the troves of passersby, hoping with each gaggle, that one would stop for a photo.

I felt the heat of the sun on his face, melting off the paint as if it were my own, and let my brain wander like his must, contemplating the big questions of the world and also about what I might have for lunch.

These “tourist traps” suddenly didn’t feel like something to scoff at, but rather as a genuine means to an end for a large subset of people. It was an opportunity for many to profit off of something that would otherwise be out of their control.

Overcome with emotion at my previous apathy, I hurriedly asked the waiter for my check.

Dashing out the cafe, I scrambled up the steps to my nearby hostel and rummaged through my pack until I found my phone.

Watching as the screen powered on, I ran back out the door and into the plaza. Just like the sunburnt couple I’d witnessed earlier, I charged up to the golden-clad, glittering man and asked for a photo.

He stood and smiled as the shot was snapped, politely nodding as my S/2.00 clinked into his tip jar.

And I walked away, a whole new kind of smirk plastered across my face.