Justin Henney is a full-time parapro at Washington Elementary school, and he’s really good at unicycling. When he wanted to support the remarkable generosity of his fellow educators, his course of action was clear. 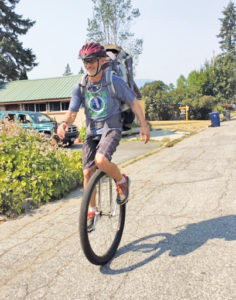 “I approached the PTA and said, ‘This is going to sound very odd, but what if I rode my unicycle across the state of Washington as a fundraiser,’ and they all said, ‘I’d definitely donate to that because it’s so weird and probably hard,’” he said. “And it is weird. It’s very unusual.”

To show support for Washington Elementary teachers pouring their personal money into the classroom, Henney is gearing up for a nearly 300-mile unicycle odyssey from Sandpoint to Winthrop, Wash. He will leave Sandpoint on Aug. 13, and hopes to earn $1,000 for the PTA to donate to teachers.

“I’m blown away by everything the teachers do, everyday. They’re always giving to the kids, in emotional, academic and organizational ways, and a lot of the teachers end up spending their own money to buy school supplies because Idaho is lacking in that department,” Henney said. “I mean, you never hear teachers complaining, but you do see a fair amount of teachers spending a lot of their own money on stuff they shouldn’t.”

While riding a unicycle down the street, let alone across a state, may sound like a nightmare to most people, Henney is excited to test his limits on the trek.

“I have to admit, I love the challenge piece and being out there by myself, not really knowing where I’m going and all the problem solving that goes into that. I think it would drive a lot of people crazy, but I kind of like that unpredictable piece,” he said.

Henney’s unicycling career began in 1976, when his parents gave him the vehicle as a Christmas present.

“My older brother could ride and I wanted to be just like him,” he recalled of his 10-year-old self. “It’s probably the most ambitious I’ve ever been with anything in my life. I learned to ride it that winter, in the Illinois snow with little training sticks. I was out in the driveway day after day, and then by the springtime I had it down.”

Henney rode his unicycle to school for years after.

“I rode it until a few (older) girls who I thought were really cute both made fun of me (for unicycling,) and I didn’t ride it for 15 years.”

Despite that embarrassing hiatus, Henney relishes the comedy of his unicycling skill.

“Everytime I think of myself riding a unicycle, I laugh because it’s just such a joke. I’m definitely a big kid. That’s why I work with kids, and I don’t take myself too seriously,” he said. “And it’s hard to take yourself seriously when you’re riding a unicycle.”

Henney was excited to use his unique talent for a good cause, but emphasized the inspiration behind his unicycle trek more than the act itself.

“What I’m doing is unusual and a little challenging, but it’s not really important. I think raising money for schools is important but me riding my unicycle isn’t all that cool.”

To show support for Henney’s ride and Washington Elementary teachers, shoot him an email at [email protected]