Through a glass (not so) darkly

‘Dark Crystal: Age of Resistance’ is a beauty, but lacks the dangerous heart of the original 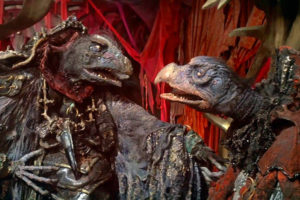 Nefarious Skeksis plot yet another vile deed on the planet of Thra. Image courtesy Wikipedia.

Metacritic gives it an 85 out of 100 among critics and 8.6 out of 10 among site users. Rotten Tomatoes is even more effusive: 86% from critics and 93% from viewers. Newsweek called the 10-episode first season “a marvel to behold” and even Forbes weighed in, calling it “truly epic” and “mindbogglingly beautiful.”

All that out of the way, I have to confess that like many other children of ’80s, the original “Dark Crystal” loomed large in my formative filmic years. The 90-minute movie — the joint effort of visionary puppeteer and artist Henson and equally ingenious Frank Oz (a.k.a. the voice of Yoda) — was unlike anything before it. Here, the guy who gave us Kermit the Frog conjured up the all-seeing Aughra and lizard-bird fiends called Skeksis, who attain immortality by using the eponymous dark crystal to suck the life essence from various inhabitants of the planet of Thra. It was hard to know what, exactly, I was watching, but I loved it.

As such, I concur with the critics on Theme No. 1: “Age of Resistance” is a masterpiece of cinematography, set and art direction, costuming and puppetry. My critique: Homage can easily lapse into fetishism. Far too often does an establishing shot linger uselessly on some weird creature frittering around in the underbrush. Yes, we get it, it’s cool that these are practical effects. Yes, someone was very creative to think of a mini-brontosaurus with crystal spikes growing out of its back. But part of the magic of the “Dark Crystal” was the way Henson and Oz put viewers into the strange and wonderful world of Thra without the sense that it was putting on a show. In “Age of Resistance,” there is a staged feeling to too many shots.

As for Theme No. 2, the “Game of Thrones” comparison is clear. “AoR” features swords and magic. It’s willing to kill off seemingly-central characters, features outlandish creatures and even has seven kingdoms ranged against a “foreign” enemy. More than that, Nathalie Emmanuel (Missandei in “Thrones”); Natalie Dormer (Margaery Tyrell); and Lena Headey (Cersei Lannister) all voice various Gelflings.

As both a big fan of “GoT” and “Dark Crystal,” here’s my beef: For all their sins, “Thrones” showrunners David Benioff and D.B. Weiss knew that the bad guys are always more interesting.

“Age of Resistance” asks us to care a lot about the good-guy Gelflings. Their politics, culture and history are expounded upon relentlessly to frame their resistance to the Skeksis. Left unanswered is why the Skeksis were able to keep all these Gelflings in line for 3,000 “trine” (years?) while being so utterly detestable.

More compelling would have been to set this series further back in the storyline to show how and why the Skeksis solidified their power in the first place.

That would both shift the focus to the more interesting rise of the Skeksis (rather than the fall of the Gelflings) and spare us a lot of uncanny-valley puppet kissing and the Jar Jar Binks of Thra, the podling Hup.

Regardless, this prequel does its source material far more justice than some others (looking at you, George Lucas). I fear, though, that it misreads what made the original so entrancing: the casual wonder of its world juxtaposed against its inherent terror and brutality. In this version of Thra, that brutality is emphasized as entirely alien. In the process, the conflict in “Age of Resistance” can feel cartoonish and low stakes — which is bizarre, given that we already know from the original film how the Gelfling race ends up. (It’s bad.)

Despite the occasional gruesomeness and frequent bouts of body horror, there’s simply not enough darkness in this “Dark Crystal.”