The impact public schooling has on one longtime Sandpoint family

Editor’s note: This is the second in a series of articles related to the upcoming March 14 vote on the Lake Pend Oreille supplemental levy. It is a profile of a local family that requested to share how levy-funded programs and schools impact their lives.

The deep Sandpoint legacy of Kyla French’s family is reflected in no less iconic a local establishment than Eichardt’s Pub.

Her grandfather, Fred Lane, and his horses, Pearl and Midget, are captured in a famous Ross Hall photograph hanging above the pub bar. The picture is a peek into a historic Sandpoint visible only in glimpses to most residents. But for families like French’s, with 70 or more years of history in the area, it is a symbol of the shared memories and traditions built over decades. 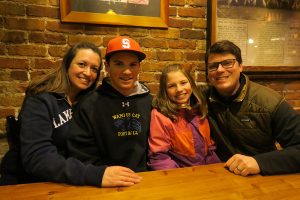 “The roots and the history of my family are so important to me,” French said. “I wanted to give my family those same opportunities, but better.”

For French, graduation from Sandpoint High School is one of those family traditions. So when she announced her son, Toben Pincher, would be attending Clark Fork High School instead, the decision was met with some shock. After immersing himself in the smaller class sizes and familial relationships among the school body, however, Toben can’t imagine another educational format better suited to his needs.

“I know literally everybody by their first and last names,” said Toben. “It’s extremely personal. People in Hope and Clark Fork converge together and are as one.”

As a student who makes a half-hour trip to Clark Fork every weekday morning, Toben is something of an outlier in the Clark Fork student body. Most of the families that utilize Lake Pend Oreille School District’s rural schools appreciate them in part for the convenience and the localized community they create. Toben, on the other hand, was drawn to Clark Fork for the ability to participate on a deeper level in athletics, including track and football. It was later that he realized the benefits of the close relationships with peers and teachers or the programs that immersed him in the natural environment.

“These are opportunities he probably wouldn’t have had in Sandpoint, it being so big,” French said

The emphasis on the outdoors and practical skill building at Clark Fork High School resulted in some unusual opportunities for Toben. He’s trained toward certification levels in avalanche safety and water stewardship. Thanks to cooperation with Idaho Fish and Game and other government organizations or NGOs, he’s gone on fly fishing or skiing trips and investigated the flora and fauna of land trusts. He even participated in vital ecological restoration when he and his classmates helped rebuild the Clark Fork Delta a few years ago.

While Toben thrives in the Clark Fork environment, he can still take advantage of opportunities offered only at Sandpoint High School due to its larger size and centralized location. Baseball, for instance, is an extracurricular activity he’d be loathe to do without.

“Clark Fork doesn’t have a baseball team, and that’s been a part of my life since I came home from the hospital,” he said.

French’s daughter, Elly Pincher, has also taken advantage of local schools’ rich suite of extracurricular activities. She is following in her mother’s footsteps under the tutelage of French’s old music teacher, Jon Brownell. And she’s exploring the world of musical theater following a program revitalization under Jeannie Hunter.

These are opportunities French, herself a first-grade teacher at Kootenai Elementary, fears will be at risk in LPOSD schools if the $17 million, two-year levy isn’t passed before the start of the district’s next fiscal year. According to LPOSD Superintendent Shawn Woodward, rural schools will be hit the hardest by the budget shortfall due to the increased cost of staffing and maintaining small schools, with several likely to close down.

“From the teacher perspective, the amount of opportunity we offer students now is top-notch,” French said. “I look at what’s being cut, and it’s just a lot of opportunities.”

“Why go backwards?” she added.

While French said her job isn’t in danger should the levy fail to pass, her work will certainly be impacted. Aides that allow her to spend more one-on-one time with students won’t be hired back. And the basic experience of LPOSD classrooms will change with the transition to double-shift schedules, with students split into early-day and late-day shifts to save operational costs.

For French, the levy vote boils down to a decision on the fundamental character of LPOSD education. She believes the levy is a worthwhile community investment. However, that call ultimately belongs to the district electorate on March 14.

“For every new student that comes through my door, I can tell that this one will be an amazing athlete or that one will be great in science,” French said. “It would be mind-blowing to me if we can’t help them achieve that.”