It’s not often that “surreal” is a good word to use when describing a dining experience. That said, there are only a few better ways of capturing the feeling when, as an almost 40-year-old Sandpoint native, you go through the salad bar at The Hydra with your 7- and 5-year-old kids — just like you did when you were their age. 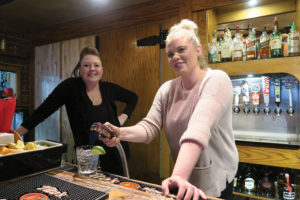 “That’s your rite of passage, when you’re old enough to go to the salad bar alone,” said Mike Armstrong, owner and chef at The Hydra Steakhouse since 2001.

In his 19 years at the helm of the Sandpoint institution, tucked away at 115 Lake St., Armstrong has had ample time to feel the generational pulse of the place.

On the bar side, “we’ve got the same old codgers who’ve been coming in here since before I was here,” he said.

Mingled with the old guard is the younger crowd; the kids in their 20s and 30s, many of whom once worked at The Hydra, and maybe went away to college or work, came home and perhaps had families of their own, and want to return to a place filled with fond memories.

“It’s like a family business,” Armstrong said. “It’s like they’re all my kids — like I have 100 kids in this town. It’s just great to see, when they come back and I get to hear about their lives.”

Plenty of lives — and big life events — have passed through The Hydra since it opened in what was once a two-story, single-family home in 1975. As now, The Hydra came to life amid a boomtime for newcomers looking for a simpler existence in North Idaho. Back-to-the-landers, spiritual seekers and all manner of free spirits flocked to the Sandpoint area then, and The Hydra quickly became a hotspot.

Before long the restaurant needed to expand, as repeated additions to the building both increased its capacity while layering it with quirks — the maze-like interior of warm-lit wooden booths, cozy nooks and creative use of stained glass giving the place its signature sense of intimacy while also accommodating up to 200 diners today.

“The old building has good bones; it’s kind of a landmark,” said Armstrong. “Some of the area in here, the hippies designed it and it kind of stayed.”

The mid-’70s and early-’80s were rowdy years, but The Hydra also established itself as an upscale yet affordable family dining establishment. Through the ’80s and ’90s, the restaurant played host to who knows how many graduation dinners, special family occasions and dates (one of my own romantic evenings there in the summer of 1998 ended with me getting dumped — and still picking up the check. To this day I’d prefer not to sit at a certain table near the stairs in the back dining area.)

Since Armstrong took over the business in 2001, “we’ve been doing better and better and we keep plugging away,” he said.

In recent years, that has included an upswing in that younger clientele, which Armstrong attributes in part to General Manager Kate Reeder, who “is really doing a great job of getting the younger crowd coming in,” he said.

“I’m an old guy, I’ve been doing this for 40 years,” he added, noting that Reeder is in her late 20s. “Having her here has really made a difference. I give her the credit. I’m just the grumpy guy in the back cooking.”

Anecdotally, The Hydra does indeed seem to be experiencing something of a renaissance — especially among the mid-20s to late-30s/early-40s set looking for a fine meal, comfortable ambiance and to enjoy the steakhouse’s ample menu of specialty cocktails. For longtime locals, the attraction of nostalgia is undeniable. Though the Shirley Temple or Roy Rogers on the table may have been replaced with something stiffer, it’s hard to pass up the opportunity to relive a bit of your own childhood by introducing the next generation to those high-style soft beverages of yore. That they’re still a staple at The Hydra is equally comforting — not much has changed in the place over the years, and that’s a good thing.

The board of fare remains scratch-made, yet priced with locals in mind. When my wife and I took our kids for their inaugural Hydra experience on a recent Friday, we went big: New York strip (perfectly rare), $29; wild catch salmon, $20; two kids soup ’n’ salad, a.k.a. “The Salad Bar,” at $5.95 each; a Kokanee (bottle), $3; a bottle of good pinot noir, $28; and a mountainous slice of chocolate cake that took us two days to finish, $9.95.

That’s a legit night out for anybody, and we happily stood up from the table after three trips to the salad bar with a check just shy of $130 — a price we’d happily pay again for the food as much as the memories — both the old ones and the new.

“It’s like coming back to an old friend,” Armstrong said. “It’s always here and people know what to expect.”