Jon Hagadone never wanted to be a bartender. When he and Vicki Reich launched Idaho Pour Authority in late-May 2013, both envisioned it as a craft beer retail store that offered samples of the beers and perhaps home brew supplies to aficionados.

“But our customers had a different idea,” Hagadone told the Reader with a grin. “They forced us into being a pub-store.” 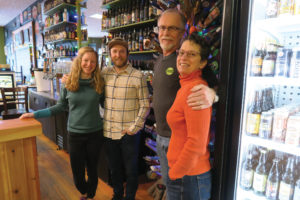 Almost seven years later, Idaho Pour Authority has firmly established itself as one of those unique businesses that found a niche and filled it perfectly. It’s not just a retail beer store, not just a pub, but incorporates the best elements of both. It’s a great place to tip a couple of pints after work, meet friends in a well-lit, comfortable atmosphere, as well as a venue to host live music and fundraisers for local nonprofits. Known as “Pour” or “IPA” around town, Hagadone and Reich’s dream business has now moved full circle as they announced March 2 they had sold the business at 203 Cedar St. in downtown Sandpoint to Ben and Jeannie Higgs, owners of the Powderhound on Schweitzer and The Hound, soon to be rebuilt following a devastating fire last year at the corner of First Avenue and Bridge Street.

“My goal was to only be in this business for five years,” Hagadone said. “After the sixth year, though, I realized I wanted to make a move. I want to have some fun and not work so many hours.”

Hagadone quietly put out the word he was interested in retiring from the beer business and, after a few false starts from other interested parties, was approached by the Higgses.

“I’ve known Ben for a while and Jeannie, too,” Hagadone said. “When he got ahold of me and said he’d heard a rumor I was interested in selling, we met with him and it was like boom, this is happening.”

Hagadone and Reich will spend the rest of March training the Higgses, culminating in a Pass the Torch party on Saturday, March 28 from 4-8 p.m. There will be live music, Powderhound Pizza and, of course, beer. The Higgses officially take over on Wednesday, April 1.

“We like what [Jon and Vicki] have built and want to continue it for all the customers who love this place,” Ben Higgs told the Reader.

Craft beer isn’t exactly a stretch for Higgs, who said he regularly focuses on high-quality brews for both of his restaurants.

While every change of ownership brings inevitable changes, Higgs said his changes will be very minor.

“We don’t really want to change much,” he said. “They’ve built a great model. … We’re going to continue the fundraisers, which are booked all the way until 2021 already. We’ll plan on being open Sundays and maybe extending hours in the summer until at least when the sun goes down. And we’ll definitely keep live music going.”

Higgs said acquiring Idaho Pour Authority won’t affect plans to rebuild The Hound Downtown after the February 2019 that claimed the building in which it was located. Rebuilding should begin in the spring or summer of 2020, with a completion goal slated for summer 2021.

“That gives us a little over a year to work on this place and figure things out and hopefully provide a good job for people to continue with the vision of what they’ve built here,” he said.

According to Higgs, any of the more than a half-dozen employees who currently work at Idaho Pour Authority are welcome to stay if they want to.

“Some are leaving already, who were planning to before this sale,” he said. “We also have a few full-time [Hound] staff that have been out of a job in the summertime that’ll probably join the team here.”

For Hagadone and Reich, the sale of their beloved beer store is a bittersweet mix of emotions.

“We have had a really great local clientele,” Hagadone said. “We have dedicated customers. … This is like my second home. My parents owned this building around World War II and I used to work here when I was a kid. So did my sisters. It always felt like home when I was here. I’ll miss a lot of the people.”

“I’ll miss our staff,” Reich said. “We have such a great staff. They’re just really fun to work with.”

It’s not a full retirement for Hagadone or Reich, though. Hagadone has a few properties to take care of, including the family building on Cedar Street.

“Were gone April 1, but they’ll still have to deal with me as a landlord,” he said.

Reich recently joined the board of 101 Women and plans to focus on volunteer work and taking care of the homestead, tackling projects that have been set aside for years.