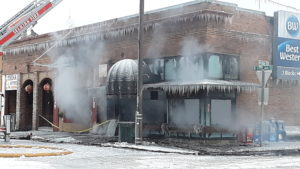 Firefighters continue to douse the building at First Ave. and Bridge St. with water at 8 a.m. Monday morning after a fire was reported at 1 a.m. Photo by Ben Olson.

The Sandpoint community reacted with heartbreak and condolences Monday morning to the loss of five local downtown businesses in a fire that sparked around 1 a.m.

According to Sandpoint City Administrator Jennifer Stapleton, the 100-year-old building on the corner of First Avenue and Bridge Street is a total loss following the blaze, resulting in between $4 and $7 million in damages. The building next door received extensive smoke damage as well, resulting in a church closing for the foreseeable future. Seven businesses total were affected by the fire.

“This is devastating for small local downtown businesses, not only the businesses directly impacted but also businesses in the surrounding areas,” Stapleton said. “This is obviously a devastating incident for us.”

Following the fire’s suppression, city workers blocked off the streets adjacent to the fire, with Stapleton anticipating that flaggers will manage traffic at First and Bridge for weeks to come. A fire marshal is investigating the cause of the fire, and the city is bringing in a structural engineer to evaluate the full scope of the damage. According to Selkirk Fire, Rescue and EMS Chief Ron Stocking, Sandpoint Police Department is also conducting an investigation. No cause for the fire is yet identified.

“I’m extremely proud of the firefighters right now,” said Stocking. “These were adverse conditions, and at the height of the fire, everyone was covered in ice. We’re dealing with a lot of frozen hoses right now.”

According to Stocking, the fire resulted in no reported injuries due to the building being unoccupied at the time. Nevertheless, the incident posed a challenge for firefighters, Stocking said. It was snowing with a temperature of 11 F, and crews were still fighting fire by the time city officials hosted a press conference around 8:30 a.m. Around 4 a.m. the incident was declared a defensive fire due to the building’s structural degradation, at which point firefighters remained outside to fight the flames with water streams.

“There’s lots of chases and lots of avenues for fire to travel, and that’s what we’re dealing with here,” Stocking said. “Lots of fine spaces that make it difficult to catch the fire.”

Local residents by the hundreds took to social media to express shock and condolences to those affected by the fire. Likewise, owners who lost their businesses reported their sad news to their fans and patrons.

Other business owners and organizations were quick to offer support. The Greater Sandpoint Chamber of Commerce reached out on its Facebook page.

“We at the Chamber are heartbroken for the business owners and their employees affected by this morning’s fire,” the Chamber staff posted. “Owning a small business is hard enough without something like this tragedy happening. We are sure our community will rally behind the owners and help in any way we can. While these historical buildings cannot be brought back again, our memories and experiences will remain.”

Eichardt’s launched a GoFundMe campaign to assist the business owners and employees who lost their livelihoods. To contribute, go to www.gofundme.com/for-businesses-affected-by-the-211-fires.