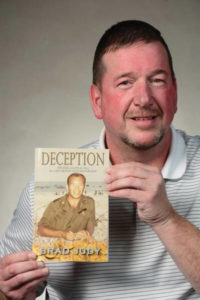 “Deception” by Brad Judy is available for purchase on Amazon. It can also be purchased at the book signing Feb. 9 at Farmhouse Kitchen in Ponderay. Courtesy photo.

When Brad Judy began writing a biography about his late father, he never thought it would end up as a book filled with hunts for buried treasure, endless soul-searching and ultimately, betrayal. Life is funny like that.

The former Sandpoint High School teacher will be selling and signing copies of his book, “Deception: the Rise and Final Fall of a decorated Vietnam Surgeon,” on Saturday, Feb. 9 at the Farmhouse Kitchen and Silo Bar in Ponderay. The signing begins at 5 p.m. and will wrap up around 8 p.m.

Since Judy first published the nonfiction book, it has sold over 1,200 copies, an encouraging number for his first literary effort.

“Deception” tells the story of Dr. Ken Judy, a man raised from nothing who became a decorated Vietnam veteran and later a renowned cardio-vascular surgeon.

But, there was a more tragic side to Dr. Judy. He was raised by an abusive father, who beat him severely. After a violent episode, his mother took him and left, raising him in what could be described as a converted garage. Later, he fell victim to sexual abuse by a stranger, a crime that was overlooked by the authorities.

“When you break down Ken Judy’s story, his is not everybody’s,” said Judy. “How many men or women are raised literally in a garage and become prominent surgeons, or prominent anything? Most of them end up in jail.”

Dr. Judy picked himself up from the ashes of a broken childhood and went on to graduate medical school at Loyola University Chicago. He ultimately joined the U.S. Army and was shipped off to a medical base in Da Nang, Vietnam in 1971, where he spent a year saving countless wounded G.I.s before returning home a decorated veteran.

But, according to his son, Dr. Judy’s demons rode right alongside his achievements. He was a womanizer and serial philanderer. His mood swings and temper also became oppressive.

“There was a time we were in a restaurant and someone was closing those accordion type walls,” said Judy. “It sounded like a machine gun, and my father literally picked up my brother and me and took us under the table. His face would change and his eyebrows would get tighter. You could see the demons were coming. If things were not perfect, we would get hurt.”

In the book, Judy describes his father’s obsession with buying gold in secret and hiding it.

“He was committed to buying South African Krugerrands,” Judy said. “In the 1970s, the price of gold was about $70 an ounce. He was a Lt. Colonel, so he was able to buy a lot. The deception was already happening. This was his one true precious, because my mom knew about this gold but she never could find it.”

Judy believes his father amassed two coffee cans worth of Krugerrands, which he estimated would be worth well over $2 million dollars in today’s dollars.

It was years after Dr. Judy’s suspicious death in 1986 that Judy received a call from one of his father’s old friends that would turn into a treasure hunt for his father’s gold that was never recovered. Judy was told there might be $2-3 million worth of gold buried in his old family home.

“He died in a wheat field five miles away from Pullman and the medical regional hospital,” Judy said. “There were way too many coincidences (with his death). When you have a series of conveniences, it becomes something more.”

As Judy began searching for the lost gold, he uncovered what he believes may be the truth behind his father’s death, a truth that involves the ultimate betrayal by someone very close to his father.

Without spoiling the ending, Judy’s writing manages to infect readers with his passion in “Deception.” It’s a book that is one part memorial to his father, another part treasure hunt for his father’s missing gold and ultimately, a final part deception, as he uncovers what he believes is the biggest secret behind his father’s death.

Judy’s book has gained positive reviews on Amazon, with one reviewer claiming, “Brad had a way of capturing the reader’s attention and the chapters left you NEEDING to know what was coming next.” Another wrote, “This is a must-read and would make a terrific movie. It reminds me a lot of Frank McCourt’s ‘Angela’s Ashes.’”

“Intentionally, I wanted this to be a biography of one of the more remarkable people I’ve ever met,” Judy said. “As I was writing it, it morphed. It morphed right after I was born, actually. I had my own input. The story to tell was mine.”