For upwards of 16,000 years, some of the earliest evidence of human habitation in the Americas lay buried in Idaho, waiting to be discovered. 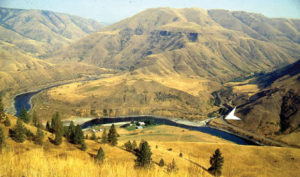 According to research published Aug. 30 in the journal Science, a find uncovered at an archaeological site near Grangeville — about four hours from Sandpoint — could change the way scientists view migration into the Americas.

Radiocarbon dates from artifacts found at Cooper’s Ferry show that people were creating tools and butchering animals there between 15,000 and 16,000 years ago — pointing to water crossing as a potential means for populating the Western Hemisphere, rather than the often-theorized migration over a land bridge from Siberia.

Until a couple of decades ago, Clovis stone tools were considered by researchers to be the first human technology in the Americas. The tools, generally thought to be around 13,000 years old, formed a “Clovis-first” hypothesis that claimed the people who first made the tools entered North America via a land bridge between Siberia and Alaska.

This story held up until researchers began finding artifacts older than Clovis stone tools. A handful of these “pre-Clovis” sites have been identified in the Americas, including one in Chile, as well as a few locations in Texas and Oregon. Donald Grayson, an archaeologist and emeritus professor at the University of Washington, told National Geographic that the Cooper’s Ferry site should be included among these important archaeological discoveries.

“Cooper’s Ferry, to me, is a totally convincing pre-Clovis site,” Grayson said.

Oregon State University archaeologist Loren Davis began the excavation of Cooper’s Ferry in 1997. Davis found a cache of western stemmed stone points — lacking the distinctive notches carved into the base of Clovis points — that could have been fixed to the handle of a spear or other weapon. Radiocarbon dating of bone and charcoal found buried in the same pit suggested these tools were up to 13,300 years old.

Davis returned to the site 10 years later to find if any of the tools he found in the late 1990s were older than Clovis tools. According to National Geographic, Davis and his team discovered evidence of heat-cracked rocks from ancient campfires, workspaces for making and repairing tools, butchering sites and fragments of animal bone that dated into the 14,000-year-old range. The deepest layer of sediment containing artifacts was estimated to be about 15,000 to 16,000 years old.

“Our results just kept on coming in older and older and older,” Davis told Science. “I just never had thought that the site was going to be this old.”

The age of the artifacts found at Cooper’s Ferry suggest people were already south of the ice sheets that once covered North America about 14,000 years ago. Davis believes his team’s findings offer support for a theory that the first people to see the Americas were seafarers who paddled or drifted across the Pacific Coast.

The western stemmed points found at Cooper’s Ferry are now believed to be among the oldest uncovered in the Americas, supporting the notion that tool-making technology developed before Clovis. Davis’ team found similar tools made 13,000 to 16,000 years ago in Japan.

“The most parsimonious explanation we think is that people came down the Pacific Coast, and as they encountered the mouth of the Columbia River, they essentially found an off-ramp from this coastal migration and also found their first viable interior route to the areas that are south of the ice sheet,” Davis told Science.