City mobilizes to clean up downtown by May 15

The race is on to whip downtown Sandpoint into shape before the start of the summer season. 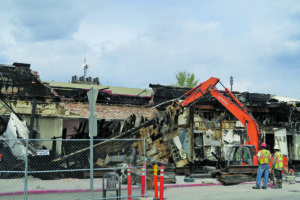 Traditionally seen as kicking off with Lost in the ‘50s in May, the summer season is essential for bolstering downtown businesses’ bottom lines and mitigating the slow shoulder seasons. With that in mind, Sandpoint city officials are mobilizing to ensure the downtown is an attractive, pleasant location to visit by May 15.

“Our events season kicks off with Lost in the ‘50s, so there has been a rush (to get all this done,)” Stapleton said.

Downtown Sandpoint has taken a beating over the past several months, with a fire gutting two prominent historic buildings. Another structure, best known as housing the restaurant Arlo’s, was condemned last year as being unsafe for the public.

According to Sandpoint City Administrator Jennifer Stapleton, both 202 and 204 N. First Ave. are slated to come down within two weeks. Demolition on 202 N. First Ave. began Wednesday, with all material expected to be removed from the area by Friday. The demolition and removal of 204 N. First Ave. will take a bit longer, but all the work should be completed by May 15. Stapleton said building owners were notified last week that demolition must begin within 10 days and be completed within 20 days.

As for the Arlo’s building, the city is waiting for the Idaho Department of Environmental Quality to return the results of soil tests taken from the site. Once that information is in hand, owners and city officials can put together a more concrete plan for its future.

“Similar to the buildings (destroyed in the fire,) we did send a notice to the building owners deeming that a dangerous building, which opens up next steps,” Stapleton said.

There are plenty of other polishing touches the city intends to complete before its self-imposed May 15 deadline. City workers will work on shoring up the right-of-way in front of the Arlo’s building, install hangers for flower baskets which will go up on May 15 and equip Cedar Street with some long-awaited lights. The city is also coordinating with Avista Utilities to move utility lines underground from Gunnings Alley up Main Street, extending nearly to Jeff Jones Town Square.

Finally, the city has a request for proposals out for screening services on opaque vinyl barricades that will be printed with images of historic Sandpoint. The barricades will keep passersby out of the wreckage from the burned building sites while providing pedestrians a more visually dynamic area for walking.