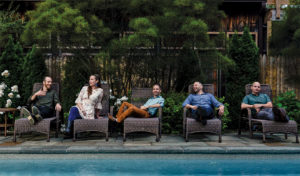 Driftwood by the pool. Photo by Heather Ainsworth.

The same is true for the New York-based roots rockers Driftwood. Talbott described the band’s energy as “absolutely absurd and electric,” adding that when he watched the band perform in the past he couldn’t take his eyes off them.

Local music lovers will have a chance to experience Driftwood at two upcoming shows: March 22 at the Pearl Theater in Bonners Ferry and March 23 at the Heartwood Center in Sandpoint.

From the outside, Arcuri admitted Driftwood appears to be your average string band, but said he’d describe the band’s sound “a whole conglomerate of styles all combined into one,” bringing together roots, funk, reggae and classical influences to land somewhere amidst the folk rock realm.

Driftwood has also been incorporating more electric elements as of late, all while staying true to their song-driven style.

“Whatever the song needs, the song gets — regardless of genre,” Sigel said.

Driftwood is set to release “Tree of Shade” April 5 — the first album they’ve created with the help of a producer, Simone Felice. “Tree of Shade” showcases a new phase in Driftwood’s sound, where “less is more,” according to Kollar.

“It’s a minimalistic approach, but it’s almost a bigger sound,” he said.

The first single off the upcoming album, “Lay Like You Do,” came to Forsyth in a dream. He woke up and immediately wrote it down — an experience he compared to “plucking an apple off a tree.” The single veers away from the foot-stomping nature of Driftwood’s better-known works and instead delivers a satisfying dose of melancholy. The song’s accompanying music video, directed by Anthony Saladino, is a minimalist production that plays a story of infidelity and revenge in reverse. 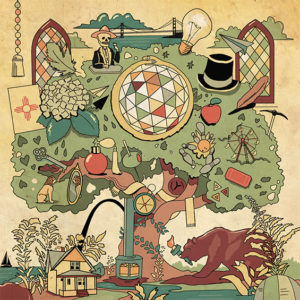 “Tree of Shade,” to be released April 5.

The combination of the contemplative songs from “Tree of Shade” alongside barn-burners like “The Sun’s Going Down” and “Fishbowl” create a live show experience that Kollar said can be “heavy and emotional, or be crazy and frenzied.”

“Fans love our albums but they say our live show is where it’s at,” Arcuri said. “We just really have fun and you can see that in our live shows. It’s a big party.”

While Kollar said he loves the songwriting and recording process, he believes the true intent should be to share those creations in a live setting.

“That’s what music’s all about. It’s for playing — it’s for putting into the air and hopefully connecting with someone,” Kollar said. “We take a lot of chances on stage and when they work it’s like magic. It’s about chasing that magic moment.”

Don’t miss the chance to experience those magic moments with Driftwood when the band plays the Panhandle next week. Tickets for both shows are $10 for youth (under 18) and $15 for adults and can be found at www.mattoxfarm.com or at select locations (Evans Brothers and Eichardt’s in Sandpoint, Bonners Books and Mountain Mike’s in Bonner Ferry). Doors open at the Pearl 6 p.m. March 22 and the show begins at 7 p.m. Doors open at 6 p.m. March 23 at the Heartwood Center and the music starts at 7 p.m. Matt Mitchell will open both shows.