The Wailers Live at the Hive

You’d be hard pressed to find anyone on the planet who hasn’t heard a song by The Wailers. Hailing from Kingston, Jamaica, the group was initially made up of Bob Marley, Bunny Wailer and Peter Tosh and formed in 1969.

What resulted changed popular culture forever, bringing reggae music from a small corner of the world to the masses. When the group disbanded and became Bob Marley and the Wailers in 1971, they succeeded in putting reggae music on the global map. Selling over 250 million albums around the world, the band has gone through many iterations through the years.

I had a chance to speak with Danglin about their upcoming show at the Hive on Wednesday, June 20. 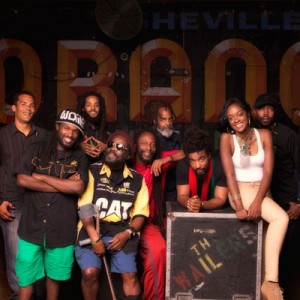 Ben Olson: How did you come to be the lead singer of The Wailers?

Danglin: In 2009, I was just coming off the release of my first single in Jamaica, a song called “Excuse Me Miss.” … [The Wailers] were looking for a new lead at that time and they heard about me and put in a call.

BO: What was going through your head when you got that call?

D: It was a blessing, really. At the time I was working on my solo music. I had to make a decision how I would put both together. Given the opportunity to work with Family Man and the Wailers and be part of the legacy, I thought it would be a great experience for me.

BO: Speaking of legacy, the music of the Wailers has reached hundreds of millions of people worldwide. It’s such a cultural revolution. Did you feel these were heavy shoes you were stepping into?

D: It’s spreading the message that is already celebrated … it’s a message of understanding and respecting what it is that The Wailers bring to people and to music in general. I knew that that would be my responsibility, not necessarily to fill any shoes, or to duplicate or replicate the legendary Robert Marley. My job is simply to perform the songs with sincerity and conviction.

BO: And they are such amazing songs. One thing I’ve always loved about reggae is that the message underneath is usually of peace, unity, of love. What is it about music that makes it such a powerful medium to spread that message?

D: It’s the most universal medium for spreading any message. I feel like if you can get thousands of people at a time at a concert to listen to you, then that’s a great way to spread a positive message. If you can record something that millions of people can enjoy time and time again, that’s also another great way to enjoy music and to spread positive messages. They’re so many negative messages circulated and being enforced and promoted. It’s always great to have a shoe in the right. … I’m really grateful to be part of something positive.

BO: The world seems pretty angry right now. Can music do anything to curb this anger?

D: With all the injustice going on in the world, there are too many people who claim they are not a part of this problem. They are not for violence or racism or brutality or inequality. Many of those people are inactive. They stay out of any political or social conflict or controversy. They speak on it in a private manner. That doesn’t help. For me, if you’re not a part of the solution, you’re part of the confusion. There are really no innocent bystanders in this world. If you have a voice, you are able to speak against violence and racism and all the things that are evil. If you have mobility, you can march and move. There are so many different things you can do to contribute to the greater good.

BO: Do you have a recollection of when you first heard Bob Marley’s music growing up in Jamaica?

D: That’s hard for me. I’m sure it was being played while I was in the womb, at my birth. It’s such a big part of our culture in Jamaica. It’s hard to be able to say I wasn’t listening to Marley, listening to the lyrics. Throughout my life and throughout most Jamaicans’ lifetimes they had a steady diet of Wailers music throughout their younger years and the rest of their lives. It’s played on the radio everyday. It’s a big part of our culture that we celebrate every day, that we need, it’s food for life.

BO: I’ve heard you guys play a lot of shows every year.

D: Around 200 a year. We have a week off here and there. It’s needed. It just demonstrates there’s a need for the music and we’re grateful to be able to provide it.

BO: Danglin, thanks so much for taking the time to talk with me. I’ll see you at the Hive next week.

D: All right man, thanks.