Where skis, bikes and beer collide

Some things just make sense in succession. Wash then dry. Ask then receive. Stop then go.

According to owner of Sandpoint Sports Svein Nostdahl, just as simple is the succession of skiing then beer, or biking then beer — depending on the season.

Nostdahl, who said he has been biking and skiing his whole life, is opening a taproom next door to his retail sports shop in Ponderay based on that lifelong observation. 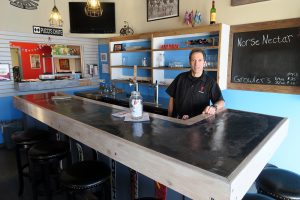 “Skiers and bikers tend to end their adventure with cold beer and stories, right?” he said.

Though the idea is unique when compared to other contenders in Sandpoint’s beer scene, Nostdahl said he didn’t come up with the sports-retail-meets-taproom idea on his own.

“I’ve seen it done a lot of different places,” he said. “It’s just another way to diversify and its kind of fun. It fits the customer I guess.”

Nostdahl’s father came to the United States from Norway. He accompanied Norwegian Olympic gold medalist Stein Eriksen in an effort to start more ski schools in the states. As a result, Nostdahl was born and raised in Aspen, Colo., and also raised as an avid skier.

Nostdahl said he moved to Sandpoint nearly 20 years ago because Aspen had become too ritzy, and North Idaho seemed to offer the lifestyle he’d grown so fond of in his childhood. He began a sports consignment store in Sandpoint, operated by his now ex-wife, and he ran the Schweitzer Alpine Racing School, a junior ski racing program.

Now, nearly two decades later, the details have changed, but Nostdahl’s mission remains—provide people what they need in order to fully enjoy their skiing or biking experience. The consignment store is now the retail store Sandpoint Sports, owned and operated solely by Nostdahl, and his new adventure lies in the taproom, SKa’L, which means “cheers” in Norwegian. The taproom also boasts a Scandinavian theme, something Nostdahl said he’s never seen anywhere else in the states.

“It’s definitely a different concept than people (are used to). I think they might view (the store-taproom combo) as kind of strange, but interesting enough that it might have a draw,” he said.

Joining Nostdahl on this new adventure is SKa’L manager Lisa Campbell. Campbell has been a flight attendant for Alaska airlines for 27 years and hopes to use her background in hospitality to give the taproom a “homey” feel.

“Like when you go to Grandma’s and she knows you’re coming and she knows you love German chocolate cake—it’s there and ready for you. That’s kind of the feel that I have wanted to emulate here,” Campbell said. “And I want to give (customers) an experience, not just a local pub, but something unique.”

Campbell said the taproom will offer a rotation of regional beers on tap and in bottles, as well as classic domestic choices.

“It’s a fun thing to be involved with because there’s so many different regional breweries that are putting out amazing beer,” she said. “It’s growing, and it continues to grow, so we just want to be a part of it.”

Campbell said the taproom’s individuality won’t stop at the Scandinavian theme. SKa’L will use mason jars in place of growlers, is partnering with the Pack River Store to offer fresh food that can be ordered for pick-up before hitting the slopes, plans to feature lesser-known artists’ work, and will feature a chalkboard wall where people can “draft it forward” — buy someone a drink, write their name on the wall, and through social media SKa’L will notify that person that a free drink is waiting for them. This community-centric feel is something Campbell, who has lived in Sandpoint for just under a year, can’t wait to be a part of.

“This offers, for me, an opportunity to belong to a community,” Campbell said, which is something she’s struggled with as an always-travelling flight attendant. “So far, I love the community. Everyone is so friendly and accepting and engaging and happy. I’m excited to offer them something that they didn’t previously have.”

The business also plans to sell tickets to Brewer’s Dinners, during which a local brewer will have their beer paired with meals and attendees will learn about the flavors over a three- to five-course meal. It will be a sort of educational format, Campbell said.

Campbell and Nostdahl agreed that offering a unique gathering place for skiers and bikers on the north end of town was a main draw for starting SKa’L, and they hope it becomes a place where adventures are recounted over food and drink.

“My whole life I’ve been a skier and a biker, and it always seemed like those events always ended with a gathering of people and food and beer,” Nostdahl said. “So I think it just kind of fits. We’ll just see how it evolves.”