“Economic justice would require a land where men will not take necessities to give luxuries to the few.” 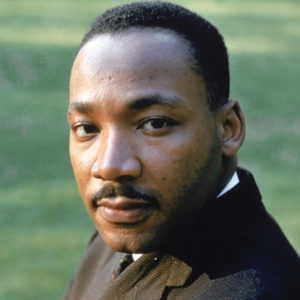 Many conservatives today, in contrast to 60 years ago, are proud to call Martin Luther King one of their own. Some claim that he was a Republican, but there is no evidence for this. His father was registered as such and publicly endorsed Richard Nixon for president. However, his son courted any politician that would support his battle for civil rights.

It was, after all, Southern Democrat Lyndon Johnson who used his consummate political skills to pass the Civil and Voting Rights Acts of 1964 and 1965 and the Fair Housing Act of 1968. Barry Goldwater was Johnson’s Republican opponent in the 1964 election, and he voted, believing that there were “essential differences between men,” against the Civil Rights Act.

Whereas the Democratic Party has done sufficient penance for a century of thwarting black civil rights, the Republican Party has betrayed Lincoln’s legacy that lived on until the 1970s. Goldwater’s vote against black rights, Nixon’s “Southern Strategy” and ploys such as the senior Bush’s Willy Horton ads set the stage for a race-baiting party that has denied voting rights and elected a president who declared that the white nationalists and Nazis at Charlottesville were “good people.”

In a 2006 essay “Martin Luther King’s Conservative Legacy,” Carolyn Garris of the conservative Heritage Foundation writes that although King’s “core beliefs, such as the power and necessity of faith-based association and self-government based on absolute truth and moral law, are profoundly conservative.” Holding essentially the same views, left-wing evangelicals such as Jim Wallis belies this claim.

Garris is obviously wrong in stating that “King’s primary aim was not to change laws, but to change people,” because he worked valiantly to repeal laws that violated any peoples’ rights, be they Hispanic, Native, or Black.

Joining many conservatives, Garris focuses on King’s emphasis on character and not color, but ignores the plain fact that King fought to overturn legislation that discriminated against people of color. Both liberals and conservatives admire people of good character, but many conservatives today do not think that the president should necessarily be among them.

Taking their lead from Jesus’ command that the rich should give everything away, the first Christians “held all things in common and sold property and possessions to give to anyone who had need” (Acts 2:44-45). This was not a temporary arrangement, because at the end of the Second Century, Church Father Tertullian reported that “all things are common among us but our wives.”

In 1524, German peasants, after learning about this economic communism from Martin Luther’s translation of the New Testament, rose up in revolt against the nobles. Luther led a brutal campaign against them, and Anabaptists all over Europe were persecuted by orthodox authorities. Today, Anabaptist Hutterites in Montana still follow the Bible’s injunction to hold all things in common.

At the turn of the 20th Century, American theologian Walter Raushenbusch introduced the Social Gospel, and many of those who joined the movement were avowed socialists. King described his theology as the Black Social Gospel, and he, like Rauschenbusch and his colleagues, were embraced by left-leaning labor unions. Were it not for the unions, King believed that “capitalist power would trample” the rights of America’s workers.

Many in the more conservative union coalition AFL-CIO held their distance from King, because they were convinced that he was a Communist. King, however, made it very clear that he was not a Communist. He condemned the Soviet Union and China for their violence, their rejection of democracy and their intolerance of religious belief.

We now know from recently released letters he wrote to his wife that King held socialist beliefs already in seminary. He admitted that he “was more socialistic in my economic theory than capitalist,” and he declared that American “capitalism was built on the exploitation of black slaves and continues to thrive on the exploitation of the poor.” The young King followed Jesus in believing in a “radical redistribution of wealth.”

Like the Labor Party in Britain, but unlike the Social Democrats in Western Europe, King believed in the nationalization of industry, but I believe that he would have come to agree with the Labor Party’s concession that this was a mistake.

University of Washington professor Michael Honey concludes that King “hoped to created a ‘third way’ between capitalism and communism that combined economic justice with individual initiative and democratic rights.”

Nick Gier of Moscow taught philosophy and religion at the University of Idaho for 31 years. Read his articles on the Third Way between Capitalism and Communism at webpages.uidaho.edu/ngier/ThirdWay.htm. Email him at [email protected]