Rob and Amy Kincaid are musicians and writers whose desire is to imbue a bit of fun and thoughtfulness into their creative output. They have chosen a unique location for their upcoming music / spoken word show in Sandpoint; the Downtown Yoga Studio at 301 Cedar Street, behind the old Belwoods Building.

“Our music isn’t the kind that does well in a bar setting,” said Rob. “We like to think our music is more thoughtful, and requires a more unique setting.” 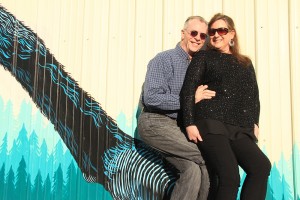 The free show will take place on Thursday, March 24 at 7 p.m. and will feature a smattering of everything from music to poetry to tongue-in-cheek short essays.

“Some people call them rants,” said Rob. “I have one on bliss, one on hugging—I don’t like casual hugging. I guess I have a weird sense of humor.”

The Kincaids have been playing around Sandpoint for about five years. Rob grew up in Sandpoint and is a classically-trained musician. He has also conducted with the Festival at Sandpoint’s choir. He plays the guitar in their duo.

Amy didn’t grow up in Sandpoint, but Rob traveled to the east coast to bring her to the town they both love. She said she was seduced into writing, which she began a few years ago. A trained opera singer, she has performed at the Festival at Sandpoint’s finale.

“Growing up, I learned about the piano,” said Amy. “I learned fakebooks at an early age. My teacher didn’t know what to make of that, since I started as a piano major.”

Amy rounds out the duo with the keyboard, and also contributes a lot of written work for the non-musical portion of the show.

“I was seduced into writing poetry,” she said with a laugh. “It’s narrative, and my use of metaphor is limited.”

Though any musician hates to pigeonhole themselves into a certain style, Rob said their style swings anywhere from pop to indie folk.

“We’re going to start a new genre,” he said. “It’s very indie, as in independent. We use a lot of folk basics and go from there.”

The show is free and will take place Thursday, March 24 at Downtown Yoga. Doors will open at 6:30 p.m. and there will be plenty of chairs. People can also sit on yoga mats. As always, donations are appreciated.

“You can even do yoga poses while you listen,” said Amy. “We don’t mind.”