I’ve been on a bit of an “XCOM 2” kick lately, which has inspired me to go on and write about cool robots that keep the world safe! 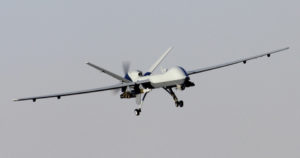 “XCOM 2” is a video game about leading a resistance of humans against an extraterrestrial occupation of Earth. In it, you get a chance to develop autonomous robot soldiers called SPARK soldiers. They carry heavy weapons and provide mobile cover for your soldiers, as well as providing hilarious verbal quips like, “I am graceful like a gazelle!”

It got me thinking, militaries around the world utilize a lot of robots. While we aren’t waging full-scale “Terminator” wars, autonomous units are currently, and will continue to play a growing role in warfare. This is equal parts awesome and terrifying, as we begin to cross the threshold from Iron Man saving the world to Terminators wiping out human life as we know it or HAL-9000 manipulating us all for its own personal benefit. Freaky as it may be, it’s good to be informed!

One important item of note is that, because of our fear of Terminators, robots cannot make intentional kills independently. While they may be perfectly capable of doing so (and probably have in certain engagements around the world), the act of utilizing a Lethal Autonomous Weapon, or LAW, carries serious penalties. The U.S. military has policies in place barring the use of a robot deciding whom to kill without a human making the kill command (though this line has blurred as technology advances), and countries utilizing LAWs faces serious consequences for doing so, from heavy sanctions to covert sabotage or full-scale invasion. It doesn’t matter how awesome your giant death robot is if an enemy nation’s airborne drops in and neutralizes your power stations or head of government. Then you just have an aimless, angry robot and no wall jacks to plug it into.

The MQ-1 Predator (often referred to as “The Predator Drone” and linked to the “Hellfire Missile”) is probably the most well-known autonomous military robot. Though controlled by humans remotely, it’s perfectly capable of taking off, flying and landing on its own. This is even truer in recent years with the prevalence of artificial intelligence. The public saw a lot of the Predator in the news during the war in Afghanistan. Nothing ups recruitment numbers like showcasing cutting edge tech scaring the crap out of everybody. It was initially developed for aerial recon, but like anything else, if you put an explosive on it, you find a thousand-and-one new ways to make an omelet.

Disclaimer: Don’t break eggs with explosives. Your omelet won’t taste good and you’ll have fewer digits to show for it. Brenden is not responsible for any culinary misbehavior utilizing heavy ordinance.

One of the most valuable uses for robots in war is IED disposal. Everyone agrees that if you have to worry about disarming an IED, it’s better to send the rolling box of gears than Dave from accounting. At least you can put the gearbox back together if things go south. The PackBot, part of the iRobot project, has seen tremendous use in Afghanistan and Iraq recently. It’s small, agile and dexterous, capable of disarming explosives remotely or fitting into tight spaces for rescue operations or emergency deliveries or retrievals.

The Foster-Miller TALON is another robot that has seen extensive use by military forces as well as HAZMAT and EMTs in the U.S. and abroad. It’s basically an RC car you got for Christmas, but on tank treads and capable of running for hours at a time. They’re incredibly sturdy and can blast through snow, sand and rocky terrain with relative ease. They were extensively used at Ground Zero after the Sept. 11, 2001, terrorist attacks. An armed variant was developed, called the SWORDS, or Special Weapons Observation Reconnaissance Detection System, though it’s mostly believed to be a largely psychological tool. Someone that sees an RC car of death protecting a building probably isn’t going to try any funny business. The SWORDS are being retired, while Foster-Miller is developing their successor, the Modular Advanced Armed Robotic System, which is going to be bigger and probably scarier.

Believe it or not, research for remotely controlled and autonomous war units started as early as 1930, when the soviets developed teletanks. While it sounds like something Professor X would wheel around in, it was basically just a tank that was being controlled by a radio operator in another tank a few hundred feet away. This doubled the effectiveness of tank squads while halving the amount of crews they needed to staff. The teletank would always be ahead of the command tank, which usually meant enemy forces would fire on the unmanned one first, then be completely surprised when it just didn’t care and blew them up anyway. The command tank would also fire on the unmanned teletank if it were to be boarded or captured, a practice still employed by modern militaries with most expensive equipment. You don’t want your enemy commandeering your freaking attack helicopter.

One more cool thing worth mentioning, the military has been experimenting with using virtual reality controllers to operate robots for war and rescue operations. In case you didn’t know, the Library has a virtual reality system, and while you might not get to pilot an actual deathbot, you can at least see what all the VR fuss is about.