Mad About Science: The Titanic

People have long been fascinated by the RMS Titanic — a British passenger liner that hit an iceberg and sank into the Atlantic Ocean on its maiden voyage to New York City in April 1912.

For some, this fascination might be entirely morbid. We, as humans, lean into stories of tragedy and death, appalled but enthralled at the thought of so much destruction. The Titanic also captures imaginations thanks to its sheer size and unmatched luxury. In addition, there’s something alluring about an “unsinkable” ship that sank, taking a snapshot of the early 20th century with it to be preserved at the bottom of the ocean; however, current estimates believe much of the ship’s remains will be gone — eaten away by bacteria — by 2030. 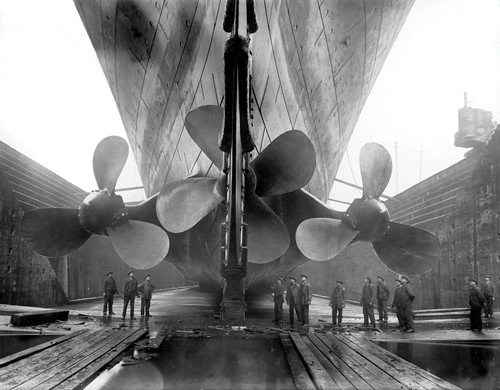 The enormous stern of the RMS Titanic. Photo courtesy Wikipedia.

The story of the Titanic has seen several revivals in popularity over the years, spurred by new discoveries and blockbuster films. What is lost in the factoids and elaborate fictional storylines is the audacity it took to create the ship in the first place. To truly understand the grandeur resting at the bottom of the Atlantic, one must start from the beginning.

The Titanic was born of a battle between luxury passenger liner companies. The White Star Line needed something to compete with Cunard’s extremely fast, beautiful ships, the RMS Mauretania and RMS Lusitania. As a result, White Star made plans to create the three largest ships to ever exist, the second of which was the Titanic — constructed in Belfast, Ireland over three years.

The ship, which required three engines, 29 boilers and 600 tons of coal per day, was deemed “practically unsinkable” by Shipbuilder magazine, thanks to its watertight bulkhead compartments, which were meant to seal off should the boat begin to take on water. However, the compartments were flawed, and that combined with the lack of lifeboats on board — it is rumored that designers found them unsightly, cluttering the decks — meant that the Titanic was woefully unprepared when it struck an iceberg, creating a dent in the hull that opened on a seam during the wee hours of morning on April 15.

According to History’s extensive Titanic research, “Hundreds of human dramas unfolded between the order to load the lifeboats and the ship’s final plunge: Men saw off wives and children, families were separated in the confusion and selfless individuals gave up their spots to remain with loved ones or allow a more vulnerable passenger to escape.”

It is believed that the Titanic nose-dived into the ocean just after 2 a.m.

Logs of people and items onboard the Titanic as she embarked on her maiden voyage showcase the class stratification and enormous wealth of the time. The ship carried the richest man in the world: John Jacob Astor IV, worth an estimated $3.5 billion in today’s American money. He died, along with about 1,500 other passengers and crew. Estimates say that about 700 people survived, mostly women and children. Men who took seats on lifeboats were often ostracized later in life, accused of dressing as women to escape the sinking.

It’s hard to imagine, but immediately following the Titanic’s wreck, there was very little information in the media. Initial news stories claimed that while the ship sank, all the passengers survived. The captain of the RMS Carpathia — the ship that rescued those in lifeboats — didn’t want any information getting out, limiting use of the wireless communication system on board only to reach authorities or relay messages between family members, according to Smithsonian Magazine.

“As the Carpathia sailed into New York — on the stormy night of Thursday, April 18 — it was surrounded by a mass of tiny vessels, all chartered by news corporations desperate to break what would be one of the biggest stories of modern times,” Smithsonian reported. “From their tugs, reporters shouted through megaphones offering terrific sums of money for information and exclusives, but Captain Rostron said he would shoot any pressmen who dared venture aboard his ship.”

One Titanic survivor, a journalist, was able to sneak a manuscript of his account of the sinking off of the Carpathia, and his words appeared in the New York Evening World soon after.

People dedicate their entire lives to learning about the Titanic. The ship’s perilous story is, in itself, a study of culture, class, engineering and humanity.

There are a ton of great sources out there continuing to explore the topic, including a recent two-part episode by podcasters Josh Clark and Chuck Bryant of Stuff You Should Know. Find “How the Titanic Worked,” Parts 1 and 2, on Spotify, Apple streaming or wherever you find podcasts.

As for me, I’m jonesing to rewatch James Cameron’s 1997 movie Titanic. A good 80% of my fascination with the ship and its wreck can be credited to that film, which is objectively magnificent, and I will not argue about it.