Investing in infrastructure is something almost all Idahoans can agree on, yet we haven’t got it down. This might be the year we can make to make the compromises and get started on it. It’s one of mine and Gov. Brad Little’s top legislative priorities. 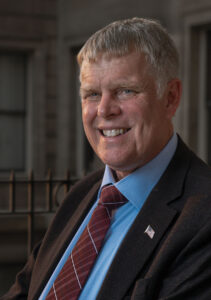 The recent Boise State University’s Idaho Policy Institute study is one of a long line of studies showing we have a problem. The gap is now $380 million dollars per year just to maintain our existing roads. A 2011 study pegged that gap at $262 million. We at least are staying ahead of inflation, but we also need to invest in new capacity to deal with traffic issues in fast-growing parts of the state.

The most recent transportation bill, House Bill 342, passed the House on March 17, and is now making its way to the Senate. This legislation, which increases the sales tax distribution to transportation from 1% to 4.5%, is better than its predecessors and allocates 1.5% of that funding to city and county governments to fix local roads.

However, the bill doesn’t go far enough. It moves extra money out of the state General Fund but doesn’t raise user fees, which I believe is a mistake. I want to see an even higher proportion of the funding going to locals to maintain a 40% local share and minimize the use of General Fund dollars. It is likely HB 342 will be amended in the Senate, and I have been working with my fellow senators across the aisle to make changes that will improve the legislation.

Better transportation infrastructure helps all of us. Many of us drive to work and get our kids to school each day. In north-central Idaho, where I am from, wheat, cattle, timber, and all the other important agriculture and forestry products we make get to market mostly on trucks.

In many parts of Idaho, we have been working to build a great cycling/walking system. This is important in many respects because, fundamentally, a walker or biker is not in a car, and that reduced use saves money for the state. It also results in healthier kids who walk to school, healthier adults who walk to work and reduces greenhouse gas generation.

What happens if we don’t make these investments? Per year, the average Idaho motorist incurs approximately $427 in costs for repairs and maintenance due to driving on poor-quality roads. If we don’t have the road capacity, people spend too much of their valuable time sitting in traffic, and if we have safety problems not getting fixed, people’s lives are at risk.

Earlier this year, Little proposed $126 million in one-time spending and $80 million in increased spending annually. These are a start, but I am very concerned the math doesn’t add up. We have a maintenance gap of $380 million per year and $80 million only closes a portion of that. The one-time spending will certainly help congestion and inject money into our economy for 2021, but it makes that maintenance gap even larger.

We need to realistically fund transportation. One-time funding will help expand the system, but it does not adequately maintain it. I am supportive of the governor’s proposals this year, but I wish they could be bolder, as should HB 342. Let’s find a way to fairly charge all users of our roads an equitable amount to properly maintain them.

David Nelson is a second-term Democratic senator serving District 5 from Moscow. He holds positions on the Agricultural Affairs, Education and Transportation committees.