We all have that one item of green clothing. It sits, in wait, until March 17, when its true power will be unleashed. 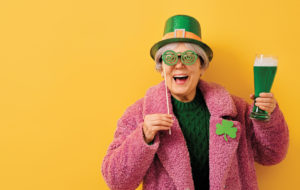 It’s a civic duty to be sure everyone is reminded the day prior to “wear green!” — and wear green they shall, since the alternative is to suffer through a day of relentless pinching, depending upon the maturity level of their company. If anything, a few goading rounds of, “Oh man, you forgot to wear green,” is enough to make anyone wish they’d just sucked it up and grabbed that one sweater, hat or pair of socks that would have pacified even the most gung-ho St. Paddy’s enthusiast.

But does anyone ever stop to ask: Why?

Truth be told, there is little rhyme — nor reason — left in the ties that bind modern-day St. Patrick’s Day to the true-blue Saint Patrick. And by blue, I mean literally blue, not green.

Early depictions of Saint Patrick — who was a British missionary to Ireland in the fifth century AD — show him wearing blue. The Order of Saint Patrick even uses “Saint Patrick blue” as its official symbolic color. Though there is no clear reason why green became the color widely used in association with St. Patrick’s Day, some point to Ireland’s nickname as “the Emerald Isle” or shamrocks as the cause for the transition from blue to green.

But that further begs the question: Why shamrocks?

According to folklore, Saint Patrick used the three-leaved shamrock to represent the Holy Trinity as he traveled Ireland spreading his message of Christianity. There is no historical evidence to back it up, but the sentiment is at least related to the saint for whom the day is named.

Though some believe St. Patrick’s Day is a celebration of the saint’s birthday, March 17 is actually the day he died. The holiday began as a feast day, celebrated almost entirely by Irish Catholics. By the 19th century, St. Patrick’s Day made its way to America as a way for Irish immigrants to celebrate being, well, Irish. Now, in the 21st century, St. Paddy’s Day is its own animal, known for parades and drink specials and for being literally the only day out of the entire year that anyone boils cabbage.

So in the spirit of most every holiday that America has adopted, let’s all wear green and join in merriment that does essentially nothing to celebrate the original intent of the day.

Nevertheless, hopefully we all take this opportunity to learn something new about St. Patrick’s Day. I’ll raise a green beer to that.

The average North Idaho spring day is undoubtedly made better by Celtic tunes, corned beef and green beer. Have a very Sandpoint St. Patrick’s Day with these upcoming events.

Enjoy a meal of corned beef and cabbage while helping raise money for the First Presbyterian Church of Sandpoint as it provides dinner, fellowship, Irish music and skits for a donation of $5 per person or $15 per family. There will also be raffles, auction items and dessert. Those with questions can contact the church at 208-263-2047.

Two St. Patty’s day shows are better than one. Matchwood knows this well, as the brewery hosts both The Nightjars and The Powers for a double-header night of live music. The Nightjars will kick off the festivities with Irish music 3:30-5:30 p.m., and The Powers will pick up at 6 p.m. with folk and Americana. The night’s menu will feature a corned beef pasty and “kick the keg” beer special.

Wear green, drink green and raise green on St. Patty’s Day as the 219 Lounge hosts its annual 24 Hours for Hank fundraiser, which raises money for cystinosis research. There will be live music, drink specials and a traditional Irish meal catered by Trinity at City Beach. Also enjoy karaoke 8-11 p.m. No cover.

A&Ps will host back-to-back St. Patty’s shindigs, each featuring a different whiskey promo and DJ. The Friday, March 20 party is sponsored by Jameson Whiskey, while the Saturday, March 21 event is sponsored by Paddy’s Irish Whiskey. DJ Shanner will supply the Friday tunes, and DJ Kevin will keep the party going Saturday. Both nights require no cover, and will include prizes, giveaways and drink specials.