It’s that time of the year again, when half the area’s population grumbles about the encroaching snow that must be heaved from our driveways, while the other half blows all of their sick leave from work on powder days on the mountain. 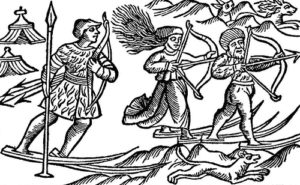 This picture shows two men and a woman hunting on skis. The illustration is from a book by Olaus Magnus Historia de Gentibus Septentrionalibus (History of the Nordic Peoples), published in Rome 1555. Courtesy image.

Amid the onset of snowsports season, have you ever wondered whose idea it was to strap sleds to our feet for fun?

The history of the ski predates civilization. Cave paintings in Europe from before 5000 BCE depict hunters chasing game with ski-like devices strapped to their feet, but their use was likely commonplace well before humans started scribbling them on walls. Europe was a nasty, frigid and snowy place during the glaciation periods of our most recent ice age, and our silly primate feet are not well adapted for trudging through snow. In order to catch ice age prey like the giant deer, Megaloceros, that could more easily navigate expansive deep snow drifts, humans needed an edge. Rather than making themselves taller, our ancestors must have figured out that creating a larger surface area around their feet dispersed their weight and allowed them to glide over just about any terrain. Because of this, I suspect the invention of snowshoes and skis were interlinked and probably even saw mirrored use in Stone Age hunting parties.

The use of skis persisted throughout Scandinavia for millenia. While the peasantry of England’s Dark Ages toiled in their fields and bogs, Norse farmers, peasants and warriors soared the Scandinavian countryside with skis strapped to their feet. The only thing more fearsome than a huge, bearded viking is one that’s coming at you at 20 miles per hour.

Scandinavians’ use of skis has persisted perhaps as long, or longer, than any other people in the world — the continuation of a proud tradition for the men and women of the north. Yet, recreational skiing as we know it is a fairly new phenomenon outside of Sweden. Though Norse lords used to compete with skis in a similar fashion as English knights used to compete in jousts during the Middle Ages, it wasn’t until the 1800s that the everyman would ski for fun. The Industrial Revolution brought with it a lot of free time for people that used to work seven days a week from sunup to sundown, as well as advances in engineering that made for more efficient skis.

Sometime around 1840, the cambered ski we know today was developed by woodworkers in Norway. Older skis were generally much wider, to ensure that a skier didn’t sink into the snow under their own weight. Rather than making wider skis, a thinner one with a nose that tapered upward increased the user’s speed and agility, while also keeping them light enough not to sink under their own weight.

By 1870, woodworkers were creating sidecuts into skis, making them lighter and far more maneuverable. It was around this time that the first downhill ski club dedicated to the advancement of recreational skiing cropped up in Europe. Skiing was evolving into something more than traveling from point A to point B — now riders were embracing the ability to make sharper turns and reach higher speeds. This ski would go on to be used into the early 1900s.

Skiing in America was really beginning to take off in the 1880s. Up until this point, skis had been made from ash trees, which offered a springy and flexible wood — the same type of wood used to create medieval lances centuries earlier.

As the Industrial Revolution advanced our ability to make more powerful, specialized tools from carbon steel, woodworkers were able to create skis from wood that had been too difficult to work with using traditional tools. European woodworkers began importing hickory from Louisiana at great expense. Scandinavian immigrants, mostly in Minnesota and Wisconsin, quickly discovered they could marry the Old and New Worlds by buying hickory cheaply and crafting skis in America, rather than having to ship lumber halfway across the world. Between inexpensive mastercraft skis and the domination of America’s mountainous West, a new age of recreation quickly followed.

Over the following 100 years, plenty of awesome developments happened to skis: they gained steel rims that helped cut through snow; multiple woods were pressed together to create lighter, more agile skis; and aluminum and plastic were developed to create sturdy, yet lightweight skis that took a beating better than traditional wood. By the 1970s, fiberglass and carbon fiber skis were commonplace and easily mass-produced, making this ancient pastime more accessible than ever.

Snowboards were developed in 1965, when people had the idea to tie two skis together and ride the assemblage down a hill. I have no doubt that copious amounts of beer were involved in this invention, if the snowboarders of the ’60s were anything like the ones I know.

Before I depart to shovel my driveway, I thought it would be fun to look at how fast people travel on modern skis. Most recreational skiers travel between 10 and 30 mph, depending on the intensity of their run. Downhill racers push anywhere from 40 to 60 mph, while Olympic athletes can get up to 95. Some of the fastest speeds ever reached by racers have exceeded 150 mph.

I don’t know about you, but that speed seems to be about the time my old friend, gravity, would like to stop in and say, “Hello!”