The science of snow

Ever wonder why there are so many different kinds of snowflakes? Different conditions in the atmosphere create different kinds of snow, which can have big consequences for people once it lands on the ground. It all begins in the clouds, which are just flying collections of water vapor lighter than the air beneath it. When the air in and around a cloud drops below freezing, water particles transition from a gas to a liquid to a crystalline solid. These crystallized ice particles bump into each other and stick together. Once enough of these ice particles coalesce, they become heavier than the air around them and fall to Earth.

Every time you catch a snowflake on your tongue, you’re licking a cloud. 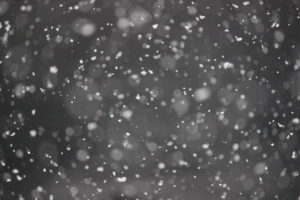 Large snowflakes, which we sometimes call chicken feathers, are formed when the air beneath cold clouds is a little warmer than 32 degrees Fahrenheit. The edges of the flakes begin to melt as they fall, then bump into other large flakes to create big, fluffy snowflakes that make for pillowy, aerated piles of snow on the ground. This happens most frequently in the beginning of winter, when it’s still warm enough to fuel the melting effect of the snowflakes before they reach the ground. It’s also one of the reasons that snow seems wetter after flakes like this than later in winter.

Small, dry flakes of snow fall when the air beneath a cloud is cold and dry. This type of snow makes for great mountain powder if you plan on hitting the slopes with a shiny pair of skis you have a newfound scientific appreciation for. It’s also a common type of snow we see in January and February, when winter hits its coldest and driest months in North Idaho.

Though it’s not snow, hail forms in a similar manner. Hailstones form in clouds during storms, when hot and cold air are cycling vertically in the clouds. The water vapor freezes into ice crystals, begins to fall, but is carried upward by streams of warm air to collide with other ice crystals, which tumble within the cloud. This tumbling wears off the edges to create balls of ice that eventually become heavy enough to fall violently to the ground.

During warmer winters, some ski resorts make their own snow using a machine. This machine binds water molecules to a material that fosters crystallization called a nucleating material, then forces it through a pressurized chamber and a nozzle that breaks the water up, allowing it to freeze into snowflakes which are then blown out of the machine.

As for all of that snow you see in the movies, that’s often just shredded paper that’s fired out of a modified leaf-blower and then sprayed with a solution to make it damp and cling like real snow. It’s a pain to clean up, but at least paper won’t melt before the crew can capture the perfect shot, especially in sunny California.