The art of the challenge

Aurora Brown’s art studio exudes the kind of warmth only a home studio can. 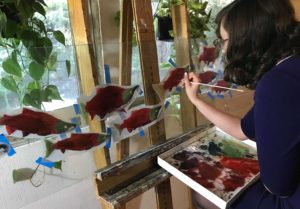 Brown paints on glass in her studio. Photo by
Lyndsie Kiebert.

Cats and dogs meander across the hardwood floor as the tea kettle begins to boil. An easel holds Brown’s latest work before a large, sunlit window, and plants adorn the entire space, bringing in a bit of the outside world.

Brown has created this unique workspace in a home and on a road she’s familiar with, having grown up in the same area tucked in the Cabinet Mountains near Sandpoint.

“When I was a kid I used to get excited to go down to the bottom of the driveway, and I’d wait for hours when I went to grab the mail to see if I could see another car,” she said. “There was no paved road — it was this really bad dirt road. I would get so excited to see someone that wasn’t my family.”

While considering her future in high school, Brown said science — specifically biology and zoology — ruled her plans until her senior year in 2013. She said several visits with scientists in those fields revealed unhappy, unfulfilled people. So she switched gears — to art.

After a year of working to earn money for school, Brown headed west to attend Northwest College of Art and Design in Poulsbo, Wash., where she earned a BFA in Visual Communications with double majors in Illustration and Entertainment Art. Now she’s putting that education to use back home in the form of Nature Trek Studios.

The name of Brown’s business is inspired by one of her greatest passions: being outdoors. She said she loves the challenges that come with scaling mountains and running an art business — two endeavors she sees as very connected.

“My constant struggle is that I’d rather be on the trails … and I’d rather be fishing, but I have to work,” she said. “I get away with it sometimes, because when it’s nice weather I usually have a sketchbook with me and I’m at the summit eating food and sketching, but I can’t justify that every day.”

But on the days she can justify it, her work benefits. Brown said she often takes reference photos on those treks, bringing them back to create her art. She is currently using photos she took of the salmon run to create a large-scale painting on glass. Many of her ink drawings — which Brown said she is best known for across social media platforms — are inspired by things she’s seen in nature.

“That’s an excuse for me to go out there and do what I love to do, and then come back and do the other thing I love to do,” Brown said. 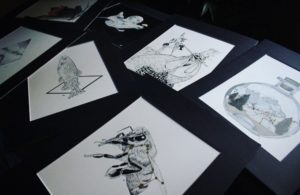 Even in college, Brown made sure her connection to nature was satisfied. Having grown up with trails right out her backdoor, it was an adjustment when in Washington she and her fiancée would drive four hours to hike 20+ miles and drive back to the city in a single day.

Still, Brown is sure to incorporate a stroll through the woods with her dogs into every single day. By starting the day with nature, she said she’s better prepared for a 13-hour day of working on commissions and beating deadlines.

“The dogs are happy, I’m happy, and then I can sit down and I can work in my studio,” she said.

Her work ranges from painting to intricate ink drawing to digital design and beyond, so her studio encompasses mediums for any project. Brown said running a business from home is no easy endeavor, but she’s committed to the challenge.

“I’m lucky because I’ve got a supportive partner,” she said. “During this transition time, for the first year or two, you’re not going to make much money. There’s always something you need because you are your own business.”

She said she got to witness the life of a successful, self-employed artist firsthand thanks to an internship she completed in college with Meredith Chernick of Fern Street Pottery.

“(Chernick’s) art is functional pottery and it’s gorgeous,” Brown said. “I learned a lot about how to run a small business from home from her.”

Still, Brown has built her operation to work beyond the walls of her North Idaho studio. Next fall, she’ll be going to visit family in Argentina and taking Nature Trek Studios with her.

“I’m really excited because that’s something I really want to do — travel and take my business with me, so I set it up that way,” she said. “I want to travel to experience the other color palettes different countries have to offer.”

Whether it’s hiking or being stationary in her studio for several hours at a time, Brown said she suffers daily from chronic pain due to both arthritis and residual effects of a burn accident when she was a child.

“This chronic pain that I have every day is this thing that really kicks me in the butt and says, ‘Um, excuse me … hustle it, really get to it because you don’t know how long you’re going to have it.’”

Even though there are tough days for Brown, there’s no doubt that this young artist is tough, too.

“The more tough it is, the more I want to conquer it. That might be why I decided to become an entrepreneur,” Brown said. “And so far, I’m doing pretty good.”