Children all around the globe are familiar with the tale of Rudolph the red-nosed reindeer. Every Christmas, songs are sung and stories are told about the remarkable and heroic caribou who overcomes adversity and ultimately ends up becoming “the most famous reindeer of all.”

That’s right, it’s all a complete and utter fiction. 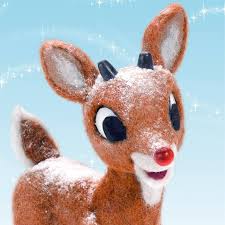 No doubt, you’ve heard it said that “there are two sides to every story.” Well, I’m Rykolph, Rudolph’s less renowned and indignant little brother, and I’m here to give you my account of how it all happened.

So come, all ye faithful, joyful and triumphant — O come ye, have a seat, get comfortable, pour yourself a delicious glass of eggnog and allow me to remove all of the tinsel and take my chainsaw to this colossal tree of lies. Yeah, sure, Rudolph will proclaim, “You’re just jealous,” with each branch of plastic that I remove from his arboretum of falsehoods, but it is he who is the jealous one — for I am not burdened with the need to grovel at Santa’s feet in order to remain his favorite.

’Twas the night before my first day on the job. It was a restless night — I was extremely nervous — so I decided to read through the new employee handbook. I didn’t get far, I think I ended up falling asleep somewhere in the third chapter: “If you see something, say something.” It was basically all about how you’re supposed to go straight to father Christmas if you witness anything nefarious or suspicious — a reindeer not pulling his weight, an elf trying to unionize the workplace or an employee who seems to be spending a bit too much time around Mrs. Claus. (Indeed, it wouldn’t be hyperbole to say that Santa had a few despotic proclivities.)

Workers were reminded to keep up the pace by the posters that hung on the walls: “Santa Claus is watching you!”

With a strong work ethic, a fresh set of velvety antlers and a lunch pail full of optimism, I arrived for work 30 minutes before my shift began. The opportunities were endless; I knew that if I worked hard, followed orders and didn’t complain, then maybe, just maybe, one day I could become one of Santa’s “Elite 8,” which was the name of the group of reindeer who led Santa’s sleigh. The rest of us had to focus on the more mundane tasks: washing the sleigh, shoveling snow and helping the elves in the sweatshop — pardon me — I mean workshop (it’s hard to sweat when it’s 40 degrees below).

Yours truly, as you may have guessed, ended up in the bone-chilling workshop.

By the time I started working there Rudolph had already climbed the ladder to become a supervisor. Many of the other employees suspected that he kept getting promotions because he was such a sycophant. All of the other reindeer used to laugh and call him names, particularly “Rudolph the brown-nosed reindeer.”

But it wasn’t just his obsequiousness that helped him to advance within the company, it was also his willingness, when it benefited him, to throw his co-workers — namely, me — under the bus.

We reindeer generally graze on leafy greens and mushrooms, but occasionally we allow ourselves a sweet treat. One foggy Christmas Eve, Rudolph, who was prone to overindulgence, went on a bit of a binge and gobbled down the remaining inventory of apples and carrots. Knowing that Kris Kringle would be furious when he found out, Rudolph, cunning as he was, decided to go straight to the main office and report me for the transgression. That’s right, he told Santa that I was the one who ate all the apples and carrots.

Santa, as expected, was livid. “That food was supposed to last us all winter,” he shouted at me. When I tried to tell him it wasn’t me, he hollered back: “You better not cry, you better not pout, you need to take responsibility for your actions!”

I tried to not hold a grudge against Santa; after all, he had simply been deceived. But I must admit, I did have a strong compulsion to deck the halls with Marxist propaganda  — “Elves of the North Pole, unite!” — you know, just to upset the ol’ chap in the big red suit.

Rudolph’s “hard work” and “diligence” served him well. A few weeks later, Santa’s Elite 8 had become the Elite 9 — and good ol’ Pinocchio-nose was not only added to the roster, but he had become St. Nick’s right-hand man.

My fate wasn’t so merry and bright. The day after Rudolph’s “merit-based” career advancement, I arrived at the factory early, like I always did, when what to my wondering eyes should appear: a termination letter. Can you believe it? What the elf? They didn’t even have the decency to fire me in person.

I tried going to the labor board; unfortunately, I received bad tidings. The North Pole is a “right to work” district, so there was nothing I could do.

The lyrics to Christmas songs often elude me, so I may be getting this wrong, but I really like the first verse from that Al Stillman tune: “Oh, There’s no place like the unemployment line for the holidays.”

Your heart’s an empty hole, Rudolph!

Unlike the real Pinocchio story, where the titular character learns to stop lying and becomes “a real boy,” this one does not have such a happy ending. The moral — or perhaps immoral — of the story? Learn to lie and cheat if you want to climb the ladder and become the leader of the pack. It’s the careerists like Rudolph who often end up clawing their way to the upper echelon of our society. We all believe that they are the heroes — we sing songs about them and commemorate their legacy with gargantuan blow-up dolls on our front lawns  — but they are, in many cases, the masters of deception.