Volcanoes are one of the most powerful and destructive forces on the planet. The raw power of the Earth is nothing short of awe inspiring, and the mere sight of a volcano instills both fear and wonder in anyone who gazes upon it. 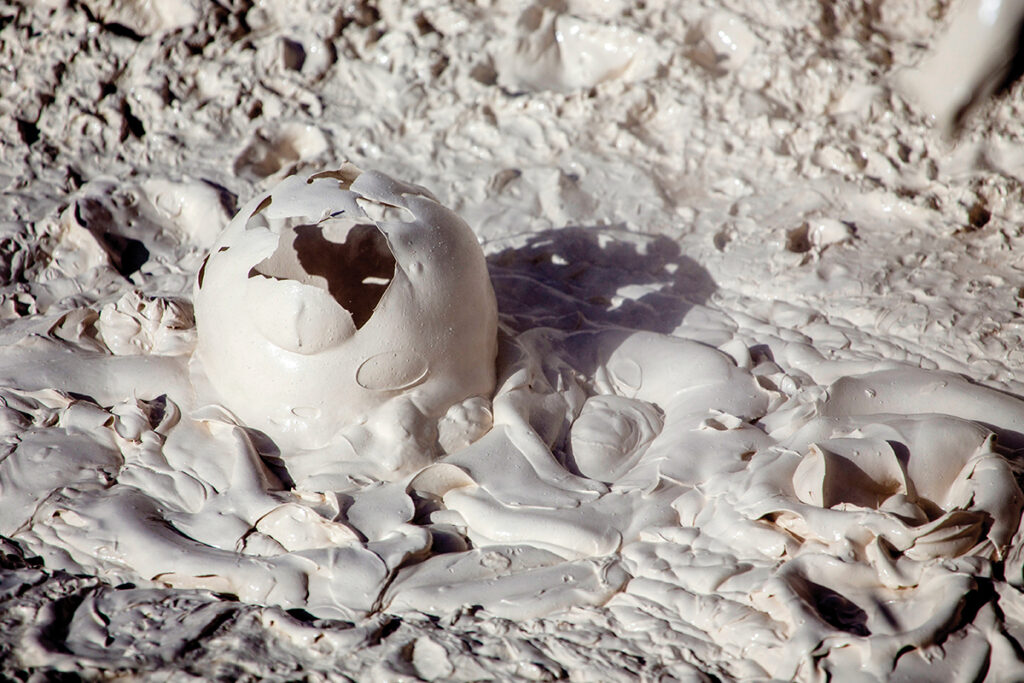 It’s easy to think that a volcano is simply a mountain that spits fire and smoke, like Mount Doom looming over the blasted plains of Mordor. Volcanoes are actually very complex structures with some pretty wild physics and chemistry going on all around them. Intense heat and pressure make elements do wild things — things that can dramatically alter the world around them in unexpected ways.

At the heart of a volcano is a magma chamber, a huge reservoir of molten rock and gas under incredible heat and pressure. These magma chambers are heated and fed by the Earth’s mantle below, which causes the Earth’s crust to fracture and swell, often breaking apart to allow the molten rock and gas to rush to the surface. Relieved of the pressure, this molten rock cools like a scab over a scratch on your skin, frequently sealing escape routes for the gas and rock below. If the gas from the magma chamber doesn’t have enough space to escape, it will make space by pushing rock out of the way — violently, in an upward direction. This is an eruption, which can come in the form of weeks-long belching of gas, ash and pumice to create new layers, or it can blast a massive hole in the side of the mountain and fling debris for miles.

This is business as usual for volcanoes, but major eruptions are relatively rare — so what happens between blasts?

A fumarole is a vent from which volcanic gas, but not liquids or solids, escape. These vents are often predictors of an impending eruption, but will sometimes persist for decades. They spew superheated poison gas, which cools as it reaches the surface. Sulfur will begin to collect and crystallize on the ground around the fumarole, giving the ground a strange yellow appearance. The mixture of sulfur and methane spewing from a fumarole can also give off a nasty rotten egg or fart smell as well.

Fumaroles will sometimes hoard precious metals belched up from the mantle, but due to the nature of the superheated toxic fumes, they’re unsafe to harvest. Some fumaroles belch up enough sulfur for humans to gather so that we can produce things like gunpowder, rubber and sulfuric acid.

In extremely cold climates, some of the gasses expelled by fumaroles will cause snow and ice to form steam that immediately freezes, eventually building chimney-like towers several meters tall.

Mudpots are what happens when biology, chemistry and physics team up to create a weird volcanic puddle. They appear to be craters of bubbling mud, which isn’t all that interesting until you factor in how they’re created. There isn’t often a tremendous amount of water in a volcanic setting, but when there is, you may see it mixing with minerals to create mud. These minerals are broken down by extremophile microorganisms that live close to the volcanic vents to turn the mud into a thick, viscous slurry. Depending on the minerals present in the slurry, it may appear to be normal, boring mud, or it may take on a tar-like appearance or even be very colorful and surrounded by red iron oxide and yellow sulfur crystals.

Often, these mudpots will fling mud out and over their edges to begin creating something that looks like a miniature cinder cone within a larger volcano.

In case you’re thinking it might be fun to take a nice, warm mud bath, it’s not. These features are not something akin to a spa trip. They are extremely hot, to the point that they can turn water into steam, and acidic enough to dissolve a human body in 24 hours — a factoid that was proven by an unfortunate Yellowstone tourist in 2016.

These kinds of volcanoes prove that everything is relative. You don’t need extreme temperatures to create a volcano. These have been observed on the icier bodies in our solar system and would be nearly impossible to emulate at scale on Earth. Normally gaseous elements like hydrogen and methane can be trapped under miles of icy crust on planets far from the sun and pressurized into a liquid form. One theory is that over time, semi-translucent ice paired with a solid insulating crust can create a greenhouse effect, trapping heat from light and causing the liquids and gasses beneath the icy surface to expand and put pressure on the surrounding structures. Just like molten rock here on Earth, the pressure has only one direction to release: straight upward against the path of least resistance.

“Ice volcanoes” on Earth are a very different phenomenon altogether, usually happening along the shores of large freshwater lakes. Lakewater splashes and the cast-off immediately freezes, piling up into a mound shape similar to the cinder cone of a volcano. Water can create a channel in the center and “erupt” from it, further building the ice volcano from within. These are fragile structures that are easily destroyed by warming temperatures and halted by even colder temperatures, as the water freezes over and ceases splashing. It’s likely that wind plays a major part in helping ice volcanoes form. These have been known to form on the great lakes in the American Midwest — I don’t think I’ve ever seen one on Lake Pend Oreille, and I suspect our mountainous topography has something to do with that.