The Genocide of the Hazaras:

Descendants of Genghis Khan fight for survival in Afghanistan and Pakistan

“All Shias are liable to be killed. We will rid Pakistan of [this] impure people.

Pakistan means land of the pure, and the Shia have no right to live here.”

—The Chief of Lashkar-e-Jhangvi in Pakistan

Since the beginning of this year in Afghanistan, 73 Shia Muslims from the Hazara community have been kidnapped by Sunni militants. Earlier this month 7 of them were beheaded, and on November 10 their coffins were carried down a street in Kabul.

For the first time thousands of Sunnis joined grieving Hazaras in a protest against the current government, which has done nothing to protect the Hazaras from attack. Since 1993 more than 8,000 have been killed in Afghanistan. 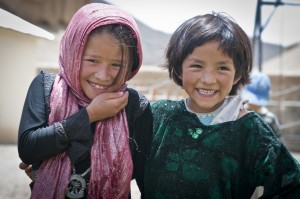 BAMYAN PROVINCE, Afghanistan – Two local girls enjoy the Arzu Studio Hope garden and playground in Dragon Valley, west of the town of Bamyan, June 20, 2012. Women enrolled the Arzu program receive higher-than average compensation for their work as rug weavers, and are required to attend literacy classes. They also have access to day care for their children, hot water to wash clothes, a kitchen, and a garden where they can grow their own vegetables and herbs. Younger children attend classes before and after weaving the rugs. (U.S. Army photo by Sgt. Ken Scar, 7th Mobile Public Affairs Detachment)

Over the past 10 years, there have been 183 attacks on Harazas in Pakistan.  Seeking refuge primarily in Iran and Pakistan, tens of thousands of Hazaras fled Afghanistan at the end of the 19th Century after Amir Abdur Rahman’s armies reduced their population by 60 percent.

In Quetta, Pakistan, about 2,000 Hazaras have died, 4,000 have been injured, and 200,000 have attempted to flee the country.  In February of 2013, the Asian Human Rights Commission issued a report declaring that a religiously motivated genocide against the Hazaras was being carried out. A second genocide of the Hazaras is now underway.

Most of world’s Hazaras live in Afghanistan (7 million), Iran (2 million), and Pakistan (1.5 million). As Shia Muslims, one would expect that the Hazaras in Shia Iran would be treated humanely. Many Iranians, however, persecute them as “barbari,” a Persian word carrying memories of ancient Mongol invaders. With their distinctive Mongolian features they are easily identified by those who wish to harm them.

The Hazaras claim to have descended from Mongol troops, who were left behind in present-day Afghanistan as the Mongols retreated from their failed invasion of India at the end of the 13th Century.  Over the centuries Tajiks and Arabic Sayeds joined the original Mongols through intermarriage.

Although some scholars initially disputed the Mongol descent theory, linguistic, blood type, and genetic evidence is strong. The Mongol army was organized on the basis of ten, and “Hazara” is Persian for the Mongol word for 1,000. The Hazara blood types are also distinct from Afghans, Tajiks, and Uzbeks.

Genetic research has proved the Mongol connection in spades. Today Genghis Khan’s genes are carried by about 16 million men, eight percent of Asia males. Incredibly enough, two-thirds of Hazara males carry Genghis Khan’s Y-chromosome. This is significantly more than the men now living either in the Republic of Mongolia or China’s Inner Mongolia.

Discrimination against the Hazaras continued even after the Afghan Constitution of 1931. There was religious freedom for all citizens except the Shias. Hindus, Sikhs, and Christians could celebrate their holy days, but Shia holidays were banned.

In pre-Taliban Afghanistan the worst atrocity against the Hazaras occurred in February of 1993, when over 1,000 were killed by direct orders of President Rabbani. With the rise of the Taliban the Hazaras were part of the Northern Alliance supported by the U. S.  In May 1997 Hazaras joined Uzbeks in executing 2,000 Taliban prisoners.  In August 1998 the Taliban retaliated by killing 2,000 Hazaras in Mazar-I Sharif.

When the Taliban attacked and gained control over the Bamiyan Valley in September 1998, 500 Hazaras were liquidated.  There, in 2001, the Taliban destroyed the world’s largest standing Buddhas, which the Hazaras had always viewed as their ancestral protectors.

The Hazaras pride themselves in emphasizing education, and even though many opportunities are blocked to them, they have achieved remarkable results. An Hazara student, Mohammad Qasim, was the highest scorer in the 2015 Kankor Examination. He scored 354 out of possible 360 marks from among 219,145 students.

It is important that the plight of these brave and resourceful people should be more widely known, and the governments of Afghanistan and Pakistan should do much more to protect their rights and stop the brutal attacks on their persons.

The conflicts between the Sunnis and the Shias offer an instructive parallel to the long history of interfaith violence between Protestants and Catholics, the most recent in Northern Ireland.

The U. S. invasion of Iraq allowed the majority Shias there to work out decades of resentment because of the Sunni minority rule initiated by the British.  Sadly, Sunni militants led by ISIS and Al Qaeda are now fighting back with a vengeance.

Nick Gier of Moscow taught religion and philosophy at the University of Idaho for 31 years. This column is drawn from his keynote address at the Mongol American Association meeting on November 8, 2014.