BoCo Dems ‘strongly denounce all acts of vandalism’ in statement

District 1 Idaho Senate candidate Scott Herndon, who won the Republican nomination over incumbent two-term Sen. Jim Woodward in May, has filed a complaint with the Bonner County Sheriff’s Office over alleged vandalism to several of his campaign signs in Bonner and Boundary counties over the weekend of Oct. 15-16.

According to a news release issued to local media Oct. 17 from the Herndon campaign, the candidate was “shocked and disgusted” to find on Oct. 16 that five large pro-Herndon signs had been marked with swastikas.

Based on numerous social media posts in the ensuing days, the swastikas were spray-painted in orange and black on large signs located along U.S. Highway 95 and Highway 200.

“[Larson] has smeared Herndon as a ‘fascist’ on social media and called him their ‘enemy,’” the campaign news release stated. “All across Idaho conservative Republicans and Christians are being vilified as ‘Christo-Fascists.’” 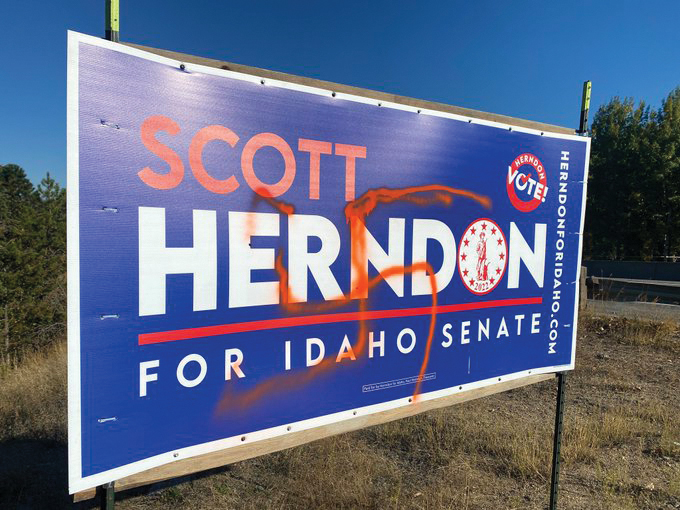 One of Scott Herndon’s signs defaced with a swastika, in an image posted Oct. 16 by the candidate on the Rosebud local Facebook group.

Speaking on behalf of herself, and not the Bonner County Democrats, Larson in an email to the Reader late Oct. 17 wrote, “It is ridiculous to accuse me of this crime. I do not support vandalism in any form. It’s illegal. Herndon should file a complaint and law enforcement should investigate and prosecute.”

Herndon told the Reader on Oct. 17 that he reported the defacement to the sheriff’s office, and a deputy has documented the damage.

BCSO Captain Tim Hemphill confirmed to the Reader that Herndon “did in fact make a report to our office and the case is currently under investigation at this time.”

Hemphill added that “depending on specific circumstances, someone who intentionally damages or defaces campaign signs could be charged with (misdemeanor) malicious injury to property or (misdemeanor) graffiti. Again, circumstances and evidence would play a significant role in the potential of criminal charges.”

In Idaho, misdemeanor offenses are punishable by jail time not to exceed six months, a fine of no more than $1,000 or both, though alternative penalties may be imposed based on the statute and a judge’s ruling.

According to Herndon, quoted in the release, “Frankly, this criminal activity has been fomented by the Idaho Democratic Party through their hateful and extreme rhetoric.”

When asked by the Reader if the Herndon campaign had any other evidence connecting local Democratic groups to the alleged vandalism, or if it was explicitly basing those claims on the statements to which it referred in the news release, the campaign responded: “The references to Linda Larson are based on statements discoverable on her Facebook and Twitter accounts as well as the accounts for the Bonner County Democratic Party.”

In a post to local Facebook group Rosebud on Oct. 16, Herndon wrote, “The local Democratic Party and their chairwoman have been whipping up a froth by characterizing conservatives, Christians and Republicans as ‘fascists.’ I call upon Linda Larson to stand down in her rhetoric and begin behaving respectfully. Linda is disrespecting the majority of North Idahoans in her hateful rhetoric.”

In addition, Herndon posted a number of screenshots, including one apparently from Larson’s personal Twitter account dated May 15, in which she wrote: “Scott Herndon- believes all abortions for any reason is murder and should be punished as such- vs Jim Woodward-sane incumbent Republican State Senator Idaho Northern most District 1. It could be a complete fascist take over in North Idaho and across the state.”

Herndon is a well-known local conservative activist, who for years led “abortion abolition” protests in public venues. In 2019, he and another local man attempted to enter the Festival at Sandpoint with firearms, triggering a multi-front legal battle between the city of Sandpoint and Bonner County, as well as gun rights lobby groups, over whether it was legal under the terms of its lease with the city for the Festival to ban firearms from publicly owned War Memorial Field. A judge ruled twice in favor of the defendants. The cases cost more than $200,000 in taxpayer dollars.

Herndon is the chair of the Bonner County Republican Committee and running as the Republican nominee for the District 1 Idaho Senate seat, opposed only by independent write-in candidate Steve Johnson.

In the Oct. 17 news release, the Herndon campaign called on local Democratic Party organizations to “repudiate” the alleged vandalism, with an unnamed spokesperson calling on the Bonner and Boundary County Democratic Party Central Committees “to join [Herndon] and the Bonner and Boundary Republican Party Central Committees in denouncing this crime in the strongest possible terms. The Democratic Party needs to definitively state whether or not they consider this crime to be acceptable. If Idaho Democrats choose to say nothing they will be tacitly condoning this hateful act.”

The Bonner County Democrats issued its own statement late Oct. 17:

“The Bonner County Democrats strongly denounce all acts of vandalism. As proud Americans, we firmly believe in the First Amendment right to free speech. This includes the freedom to express oneself with a campaign sign. As we have also experienced rampant vandalism of campaign signs in numerous past election cycles, we whole-heartedly understand the feelings of violation that vandalism incurs.

“All acts of vandalism should be promptly reported to the local police or sheriff’s office.”