By Brenden Bobby
Reader Columnist
Sponsored by The Library

Women’s rights are a hot topic, especially since the election. I’ve overheard conversations in the street that made me wonder if I had stepped into a singularity and was sucked into the 1800s, and not in the cool “G’day, gent! Hello there, chap! Hup hup!” way.

Because apparently 2016 cast doubt in some peoples’ minds of the validity of contributions from the women of the world for some stupid reason, I feel it’s my duty as a human and a promoter of science to take to the horn and do what I do best: Make science awesome… for women! 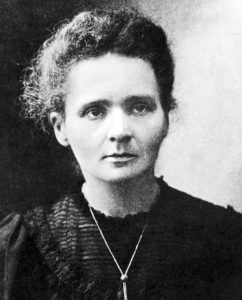 For the month of January, I’m going to pen articles strictly about women and their contributions to science. Likewise, as I shamelessly plug, the library will be promoting a display of Women That Made History to the left of the Circulation Desk all month. Check something out, I guarantee you’ll learn something you didn’t know.

We’re starting off the new year in a radioactive way.

Everyone knows how Madame Curie’s story ends: a tragic and ironic climax with her research ultimately killing her. While technically true, that really doesn’t paint the most accurate picture.

We’ll come back to that later.

She was born Maria Sklodowska, a very proud Polish citizen in Warsaw in 1867 while it was still part of the Russian Empire. You know, while the Russian Empire was still a thing. She came from a family of prolific teachers, which is definitely one way to start off in the right foot when you’re planning on making history. Due to her parents’ strong Polish pride, many of the Russians in power worked hard to push them down and dash their family’s fortunes, making schooling a very difficult thing to pay for.

However, that didn’t stop her from grabbing life by the horns hog-tying science into submission.

She studied in Warsaw first, at the age of 23, before moving to Paris to study there, where she would soon meet her future husband and the man she would share a Nobel Prize with: Pierre Curie.

Shortly after she earned her PhD, she became infatuated with radiation, a term she actually coined. Radiation wasn’t understood as well at the turn of the century as it is today. X-rays had just been discovered, and we found that Uranium salts could emit rays that did something similar.

During her time studying radiation and the elements that emit it, she stumbled (almost by accident) upon not one, but two new elements.

The first was polonium, with the atomic number 84. It is highly radioactive, and she named it after Poland.

The second was radium, with an atomic number of 88, also highly radioactive. When it decays, it turns into radon gas, which I think is pretty awesome, but also kind of scary because the gas is also radioactive and hazardous to your health. It’s also colorless and odorless, so you can neither see nor smell it, but it can kill you. Zoinks!

Polonium and radium have a really interesting pairty to them. Especially when you look at tobacco production since World War II. We’ve found traces of polonium in cigarette smoke, which we’ve found comes from particles of lead from the atmosphere. That lead is a product of radon gas, which is the result of radium in fertilizers decaying. What a crazy, carcinogenic loop.

After the arduous task of isolating radium (It took over a ton of ore to get one tenth of a gram of the stuff), they published several papers on useful applications for it, including noting that it could kill tumor-causing cells faster than healthy human cells, the basis for modern radiation therapy in cancer patients.

In 1903, she shared her first Nobel Prize in physics with her husband and also physicist Henri Becquerel, for their work discovering the new elements. She became the first woman to win a Nobel prize, which is a pretty huge deal, especially since she would win another one in chemistry eight years later, becoming the first person and the only woman to win the award twice, and in two completely different fields of study.

I don’t know about you, but my aspirations waking up in the morning are to sleep for another 15 minutes and try not to spill my cereal on myself.

During World War I, she contributed an immense amount of time and personal resources as a humanitarian to help treat wounded soldiers near the front lines. Her background in radiation meant she was a perfect fit for radiology (X-rays, primarily) that would assist front-line surgeons that, until her intervention, had been flying blind. She also used a special injector to administer radon gas from her own personal supply to sterilize wounds and halt infections. How cool is that?

Despite her countless accomplishments and her contributions to science during a time when women in science were pushed into the background and dismissed simply because of their gender, her death remained the most recounted story of her life.

She and Pierre both worked with highly dangerous radioactive materials, yet were virtually unaware of how dangerous they were. Both suffered from lasting chronic health problems (though Pierre was killed by a horse-drawn cart, totally unrelated to his work) including cataracts and anemia. All of Madame Curie’s paperwork is too radioactive to handle without protective gear, and even her daily items like her cookbook had become tainted by radioactivity.

I could only scratch the surface of the incredible life this woman lived. If your curiosity has been piqued, come check out one of our books about her. I assure you, we have no shortage!