Yeah, yeah, dragons aren’t scientific, I know. But you also know that I like to touch on history, culture and myth and how it influences our scientific pursuits and development.

Besides that, dragons are freakin’ awesome. 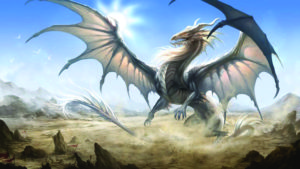 A mythical drawing of a dragon.

The typical depiction of a dragon in the west is of a four-legged, two-winged reptile with a serpentine neck that breathes fire and hoards gold. It is almost exclusively an antagonistic figure, generally representing the devil or all the bad traits of humans to be slain by a gallant figure. This was a cultural appropriation made during the High Middle Ages, probably during one of the several times the Catholic Church spent considerable amounts of time, money and influence to bring paganistic religions into the fold with the help of countless faceless European aristocrats.

It’s worth noting, before continuing, that wyverns and dragons are not the same thing. A wyvern has two legs and two wings, while a dragon has four legs and two wings. If you want to get really technical, dragons are often intelligent and capable of speech and planning while wyverns are bestial in nature. Sorry, everyone, Emilia Clarke is the mother of wyverns. Not to say that’s bad. I want to be a mother of wyverns, too!

I differentiate these two nonexistent beings for the sake of heraldry, the symbolism and banners that noble houses bore into battle during the Middle Ages. Houses that displayed the dragon sought to bring imagery of King Arthur Pendragon: honorable, wise, powerful and rich. Crests that displayed the wyvern were believed to be big “don’t mess with me” signs. They projected raw power and valor. That’s largely speculation, however, as despite the prominence of the wyvern being used in heraldry, not much was written down as to why exactly it was chosen.

Humans have a deep connection to dragons through history. Most of our creation myths involve some form of them in some way. A sort of dragon guarded the golden fleece Jason sought in Greek mythology. The dragon Nidhoggr gnawed on the roots of the world tree, Yggdrasil, in Norse mythology. One could argue that even some Native American tribes had a dragon in their mythology with the Piasa, a dragon-like picture once painted on bluffs in Illinois. In Asia, dragons appear as harbingers of great luck and fortune.

In China, the Golden Arowana is an awesome, serpentine-looking fish that’s thought to guarantee a family’s, or business’ wealth and luck. Looking at the Golden Arowana’s scales in comparison to depictions of eastern dragons, it’s easy to draw conclusions as to the origins of eastern dragons. In the west, dragons encompass everything we fear and envy. Serpents have a long history of delivering horrifying deaths to people, from venomous bites struck from the shadows to asphyxiation by colossal jungle monsters. Reptiles in general have always been viewed as being a very primordial force in the world, things that lack empathy and are quick to kill for their own gain. Ironic, considering the absurd level of cruelty humans have been known to inflict throughout the ages to… well, everything around us. 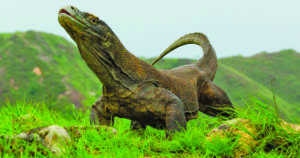 The closest thing we have to a dragon in the real world is probably the Komodo dragon, though most dinosaurs look an awful lot like western dragons. Perhaps that should be inverted. It’s not unheard of to think that dinosaur fossils could have been found during the Middle Ages and mistaken for the bones of a dragon. I mean, the scientific method wasn’t exactly a thing at the time, and communication wasn’t exactly the medieval aristocracy’s strong suit.

Fortunately for all of us, we have never had to share the world with an airborne reptilian predator that can breathe fire. Interesting to note, though, there are creatures in our world capable of producing absurd amounts of heat with parts of their body. The pistol shrimp earned its badass name by using a specially modified claw that can snap shut at such intense speeds, it creates a cavitation (a void underwater, basically) that, upon collapsing on itself, reaches internal temperatures of over 4,000 degrees and can register at over 218 decibels. In case you’re wondering, that’s enough to transform sound into a shockwave, like from an explosion. A rock concert caps at about 140 decibels.

You probably weren’t expecting me to start talking about bad mama jama shrimp, but that’s how I roll. So the next time your DM at D&D decides to kick it up a notch, don’t be afraid of the dragon. Be afraid of the terrifying shockwave-producing demon shrimp lurking up behind him.