Memorial day was on Monday. How did you spend it? 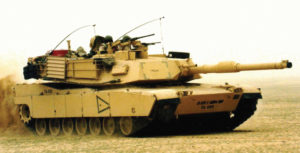 I want to do my part to honor the fallen as well as those that have served to make our country the best it can be by doing what I do best: showing off cool tech!

The M1 Abrams main battle tank is one of the coolest things utilized by our military. Weighing in at 60 tons, the M1 is 32 feet long (gun forward) and 12 feet wide, capable of going up to 45 miles per hour. If you’re thinking: “Whatever, my car can do that and more”, I’ve got some news for you. Your car doesn’t have a 1500 horsepower engine, nor is it capable of accurately spitting a 120mm round up to 9,000 feet while getting shot at.

Well, I don’t question your Prius’ ability to get shot at, but it’s probably not going to be driving away after!

Let’s take a quick detour for a short history lesson, to learn why the M1 is so cool.

During and before World War II, tanks were built for specialized tasks. You had light tanks, designed to be lightly armored and move fast to punch a hole through infantry lines. You had super-heavy tanks that were heavily armored and slow, designed to sit still while blowing things to pieces. Basically, tanks were on a slider system. You could have heavy fire power, armor or speed, but you could only have them in certain configurations. Too much armor would slow the tank down, same for too much firepower, which wouldn’t let you move if you were carrying tons of ammunition.

As the Cold War was enveloping the globe, the world superpowers said to hell with that and began developing the main battle tank, or MBT. The MBT would utilize the best of all worlds to create a fearsome warhorse that’s good at everything and bad at very little.

Everything about this tank is cool, starting with its armor. While it just appears to be a whole bunch of metal piled up, that couldn’t be farther from the truth. The M1 is covered in something called Chobham armor, which is hardened ceramic sandwiched between metal. I know what you’re thinking, and no, your grandma’s Ming Dynasty knockoff vase isn’t going to stop bullets. This stuff is a composite that’s meant to be elastic and flexible in the center, but with shards of very hard ceramic throughout. That way, if something like an anti-tank round punches through the metal, the interior will flex with the projectile to sap its inertia and keep the vehicle’s moving parts from sustaining damage. In recent years, depleted uranium has been used to armor the tank, as uranium has an extremely high density. I guess you could say that’s… rad.

When you think of a tank, you probably don’t think about decking it out in camouflage. I mean, you can see it coming from a mile away! Except you don’t want the enemy to see it coming from a mile away, you only want it revealed when it’s close enough to wreck the enemy’s day. Multispectral camouflage comes in all shapes, sizes and kits, but it functions for one specific task: make sure your tank can’t be seen. In this age of warfare, that includes concealing the tank from infrared, thermal and radar. The ways in which this is performed exactly are pretty secretive. I mean, the whole point is to not be seen, so why would you tell somebody how you’re not being seen? The gist of it is to cover the tank in surfaces that mitigate heat transfer or bounce radar off in multiple directions. SAAB has an online page set up to showcase some of their work on the Barracuda MCS, which the M1 has used in the past.

Now to cover what you’ve all been waiting for: the armaments. The M1 in its current iteration is equipped with an M256 smoothbore gun, a 120mm cannon capable of firing everything under the rainbow’s arsenal from flechette rounds to armor piercing heat-seeking missiles. It also comes equipped with three machine guns, one .50 caliber and two 7.62mm that can be operated safely from within the vehicle because let’s be honest, no one wants their torso hanging out in the middle of an urban firefight.

The main gun is so much more than point and shoot. It comes equipped with a plethora of computers and sensors that track things like exact distance using a laser, crosswind speeds and even the temperature of your ammunition. You don’t want the ammo in your reserves to be too hot, or it will cook off. I’m not talking about reducing a raspberry vinaigrette here, I’m talking about blowing up under your seat and turning you into extra crispy dog kibble. Luckily, the M1 also comes equipped with state of the art fire suppression to keep that from happening.

Anyone that’s manned one of these things in active duty is probably chuckling at me right now, because I’m sure all of this information is extremely dated. There’s absolutely no way the Army is going to release all of the information on one of their most-used war machines for a small town blogger to leisurely peruse.

So chuckle away, good sir or madam. You have heartily earned it, and I hope you had a great Memorial Day weekend!