It’s almost Thanksgiving, and you know what that means!

Said no one ever!

The noble turkey. The large, proud bird that nearly eclipsed the bald eagle as America’s national bird at the behest of Benjamin Franklin.

They sure are delicious. 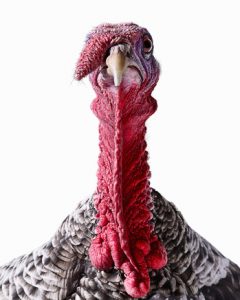 When you think about a turkey, you probably envision a large, proud bird with bronze feathers striding through the field, maybe surrounded by a flock of scraggly little babies (called poults), or the large juicy beast on your table with its stubby legs pointed to the sky.

Believe it or not, these are two very different creatures. Wild turkeys are much lighter than their domestic counterparts (almost a third of the weight), and the domestic ones are the guys you grab from the grocery store every year.

What other differences are there?

Wild turkeys are not native to Idaho, they were actually transplanted here. The ones we have here are called the Merriam’s Turkey, the Rio Grande Turkey and the Eastern Wild Turkey. Their meat tends to be very dark since the whole bird gets to exercise fairly frequently, what with the “I’m desperately trying not to get shot, mauled and/or eaten every hour of every day” thing going on for them. They also have excellent vision, and it’s been postulated that they can see in color.

The most common domestic turkeys are a breed called the Broad-Breasted White. They are large, they are dumb, they can’t fly, and they also can’t breed on their own. They are basically the perfect livestock!

Their feathers are also pure white, leaving no noticeable dark marks on the meat when they are processed, giving them that pristine pale look before going into the oven. Their excessive weight also means more food for us, as well as less movement for the turkey, which makes larger amounts of white meat for human consumption. There is a second variety called a Broad-Breasted Bronze, but the dark melanin in their feathers tends to bleed onto the meat during processing, making it much less pretty on the table. It still tastes the same!

If you’re a hunter, you probably know that only the male turkeys, called toms, gobble. In the wild, this seems to be a form of a mating call, though domestic Toms will do this every time they hear a loud or a shrill stimuli, such as a car horn or a police siren, or at four in the morning when they like to stand outside of your window and gobble until they run out of breath. Toms are also the only ones that get “beards”, or long fibrous feathers emerging from the peak of the bird’s chest. The longer the beard, the older and more manly the bird. Female turkeys are called hens.

There are many varieties of domesticated Turkey aside from the White and Bronze; those two are just the most widely bred and definitely the most eaten. In more specialty and hobby farms, you might see more vibrant colors and patterns. The Royal Palm turkey is the most striking, sporting white feathers with black dashes along the back and the tail (You may have even seen one at the Fair this year!); the toms are a true sight to behold. Red Bourbons are a pale orange-red color with white accents on their tails. There is even a turkey with solid black feathers. All of these are called heritage breeds, and just like with your garden, they were cultivated by independent farmers over several generations to present unique plumage and special traits Whites and Bronzes don’t have.

Heritage birds are generally a little bit smarter and much smaller than their commercial counterparts. Most heritage birds are capable of flight, fully able to go up to 40 feet vertically, and anywhere from 30 to 40 feet horizontally with no problems. They’re also fully capable of breeding on their own, unlike Whites/Bronzes.

So if commercial breeds can’t do the dance with no pants, how do we have tens of millions of them on dinner plates every year? Is it something cool and ultra high-tech? Are turkey embryos floating in tubes in advanced laboratories, injecting butter-solutions into them as they turn into the perfect meal?

Not even close. Commercial turkeys are artificially inseminated like cattle. I don’t know about you, but I would hate to have that job. Why is it even a job? Why can’t they do it on their own?

We’ve bred them to give us days upon days of white meat leftovers, and to do that, we had to make sure that they get fat enough, and their breast meat is plentiful enough to give us so much food. Unfortunately for the turkey, this means they’re too large to… well, you know.

But enough about that! Have you SEEN a turkey’s face up close? Man, they’re ugly. They look like they have no skull, just brains on the outside of their bodies. This is purely a genetic thing, and it’s not the only bird that looks like it has a wrinkled brain for a face. They’re actually capable of changing the color of their head to suit their mood, like an avian mood ring. This acts as a social cue for other turkeys and a warning for non-turkeys. Their heads can shift between shades of red, white and blue (one of the traits Benjamin Franklin admired about them), but if you see one turn blue, you might want to take a step back.

If the chicken craze is too mainstream for you, and you want to save money on your Thanksgiving this year with a rafter of your own turkeys, I may have some tips for you. I don’t want the hundreds of dollars worth of my garden they ruined to go to waste, so I’m going to impart my expensive lesson onto you, dear readers.

At first, turkeys are easier than chickens to raise. They eat quite a bit more, but seem to poop just as much. They also stay about the same size for the first few months, when suddenly they explode into an unrecognizable beast. If you want to start your own rafter of them from poults, you’ll need a covered bin, preferably inside under a heat lamp. Make sure they have food and water, and make sure their bedding doesn’t get wet.

When you feel they’re ready to go outside after a few weeks, there are a few ways you can manage them. If you have a lot of land, set their feeder and water up somewhere you want them to stay. They’ll wander off, but think of the feeder as home base. They’ll always come back to it. Free ranging is great, because they’ll crush your tick population in a single season, but you’d better enclose your garden or it will vanish with the ticks. Same for your topiary, especially new plants.

If you plan on putting them in an enclosure of some kind, be sure to give them greens or throw down some alfalfa for them or they will get sick. Rocks, too, since they need those to digest food. Each turkey can get up to 40 pounds or more at maturity, so make sure they have plenty of space. They will start fighting and killing each other, wasting all of your hard work if they’re cramped up too tight together.

Some people raise them in the same space as their chickens and ducks, but I feel this is dangerous, especially if you own a lot of bantam chickens. Depends on the bird.

After taking into account the amount of food you’ve paid for and the initial price of buying them, you’ve probably spent more raising Thanksgiving dinner than you would have from just buying a turkey from the store, but at least your conscience would be clear that you knew the bird had a good life. Plus you can stock up for the winter or sell off the extras.

Personally, I think the heritage breeds are more attractive and much easier to maintain than the commercial ones, and most of our local farm and feed stores are more than willing to give you a list of what their hatchery will ship, if you are able to convince others to pre-order some of the heritage breeds with you (most require a minimum shipment).

If you plan to partake on the grand adventure of farm life this spring, or even if you don’t, I hope you learned something.

At the very least, you should have something interesting to say at Thanksgiving about your dinner this year!