In the face of springlike weather in November, work on the replacement bleachers at Barlow War Memorial Field continues, free of the added challenge of fighting snow. So far. Not that it’s been a cake walk. It hasn’t.

And when the white stuff finally arrives, what then? 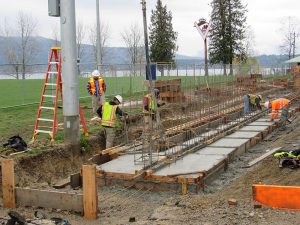 “The city of Sandpoint is tasked with snow removal here on the site,” Reynolds said. “If we get three or four feet of snow, it could be a problem.”

Waving an arm towards skeletal rebar sticking up from concrete slabs, Reynolds said, “First off, we don’t have anywhere to put the snow. Secondly, a significant storm can impact the city’s ability to deal with its own snow removal.”

The contractor, Northcom Inc., has been given only 10 days to allow for shut downs due to weather. And it’s not even winter.

Sandpoint’s Parks and Recreation director Kim Woodruff is impressed with the work Reynolds and Northcom has performed so far: “The general and the subcontractors have done an exceptional job,” said Woodruff. “Especially taking into consideration all the weather we’ve had lately.”

Small by big city standards, the entire project will require a mere 550 yards of concrete.

Here’s mud in your eye.