The success of Ballot Measure 2 in the recent general election demonstrates a growing concern over the affordability of health care in Idaho. This ballot measure allowed for the expansion of Medicare insurance to cover more low-income families in our state. But this ballot-box success might also serve to illustrate the misunderstanding many people have about access to medical care, confusing affordable healthcare insurance with affordable health care. They are not the same. Access to medical insurance is not a guarantee of better medical care. It only means a company or organization is collecting a fee. The affordability of the actual care, even with insurance, is another matter. 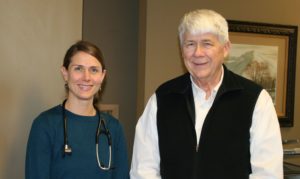 One doctor in Sandpoint recently addressed the problem of affordable medical care in a very tangible and innovative way. Three years ago, Dr. Frazier King founded Sandpoint Direct Primary Care (DPC), which provides “full-spectrum” health care for families and individuals. Costs are very affordable. Adults pay only $50 to $65 a month, depending on their age, while children are $25 a month or less, to receive comprehensive family medical care. And Dr. King limits the number of patients he will serve, which allows him to spend as much time as he needs with each person he meets. Members of Sandpoint DPC can even consult him via the internet or with a smart phone!

Business has been good; too good. Dr. King has more requests for service than he is able to take. So, he went out and found a partner. Sandpoint DPC is expanding! Please welcome Dr. Jillian Klaucke, Dr. King’s new partner. And she is accepting new patients.

For Dr. Jillian, coming to Sandpoint means coming full circle. She was born and raised in Sandpoint and is excited about returning home and being near her family, parents, and grandparents. In fact, it was the example of her grandfather — Dr. John E. Verby II — that set her on the path to becoming a family physician. She knew by first grade that she wanted to follow in his footsteps. But the path was not direct. She attended college at Cal Poly in San Luis Obispo, Calif., attended medical school at the University of Nevada in Reno, Nev., and completed her residency in Billings, Mont., at the Montana Family Medicine Residency. In addition, she twice worked as a family physician in New Zealand and at a traditional private practice in Baltimore, Maryland.

And along the way she married (her husband Jonathan Klaucke is an orthopedic surgeon at Bonner General), had two children (daughter Greta and son Andreas) and became a fellow with the Academy of Wilderness Medicine, which allowed her to combine her two interests of medicine and the great outdoors.

It was her work in New Zealand as a family physician that drew her to the direct-primary-care model after returning to the United States. In New Zealand medical doctors are spared the “red tape” and bureaucracy that plague doctors in the American medical system, and there she was able to spend the time necessary to meet the needs of those under her care. No racing the clock to hurry from patient to patient. Similar to her practice in New Zealand, Dr. Jillian says that the direct-primary-care model allows her to have her patients’ “concerns heard and acted upon, not prioritized and put off.” And for Dr. Jillian, the DPC-model also presents “the idea that medical care can not only be affordable, but that patients should feel like they are part of a family, not just a family medicine practice.”

And unlike the traditional American doctor’s office, the DPC model is inherently flexible. This allows for patients to often have same-day appointments, buy their prescription medicines at wholesale cost and have 24/7 access to their doctor if needed.

Yes, affordable healthcare in the United States is an urgent problem. But Sandpoint DPC is a step in the right direction. And not only is it affordable, it’s friendly. And unhurried. And a good place to be. And now that Dr. Jillian has joined Dr. King, it’s twice as nice!