Keepin’ Time by the River:

Without a doubt, Beth Pederson is one of Sandpoint’s most beloved musicians. The honey-voiced singer-songwriter has delighted audiences near and far for over 40 years. Most know Pederson through her decades-long partnership with Cinde Borup in the group that came to be known as Wild Roses. 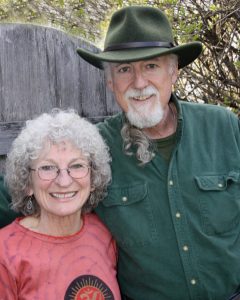 Beth Pederson and Bruce Bishop will be playing at Di Luna’s for their CD release party on Wednesday, Dec. 14 at 7:30 p.m. Photo by Amy Borup.

Through 28 years, Wild Roses produced four albums and played their special blend of folk music to appreciative audiences throughout North Idaho. After Borup passed in 1998, Pederson began playing a series of dinner concerts at Di Luna’s Café and released a solo album called “Everything Must Change.”

It wasn’t until 2007 when Pederson joined forces with another musician: Bruce Bishop. The pair have played with one another for eight years, but next week marks the first time they have released an album together.

“Beth had done this great album called ‘Everything Must Change’,” said Bishop. “I listened to it and just wore it out. When it became apparent that I was going to move here, I wanted to figure out how to get together with her.”

The two have been playing together ever since, most notably at the Hope Marketplace on Sundays and the occasional concert at Di Luna’s.

“When Bruce and I first met and started playing together, we connected instantly, both personally and musically,” said Pederson. “It was magical.”

“Keepin’ Time by the River” is the first in a two-part album that Pederson and Bishop have co-produced. They will unveil the new album at a special dinner concert at Di Luna’s on Wednesday, Dec. 14 at 7:30 p.m.

“We started recording this summer,” said Pederson. “We went into the studio every Wednesday night and started laying down tracks.”

The album will feature a mix of 14 beloved covers and originals, with Pederson and Bishop trading off lead vocals.

“We were trying to recreate a live performance, so we tracked the whole album live,” said Pederson. While Pederson and Bishop both played acoustic guitar and vocals, Bishop also took a turn at the weissenborn, a Hawaiin instrument in the style of a lap steel. Betsy Hammet played the auto harp on one track as well. Gail Lyster did the artwork on the cover, and Avalanche Graphics laid out the CD art.

Pederson and Bishop recorded so many songs, in fact, that a second companion album called “Driving Into the Moon” will be released next February.

The pair chose to debut their album at Di Luna’s: “It’s a listening room,” said Pederson. “It’s one of the only ones in Sandpoint. People are so attentive and intimate – they’re there to listen to the music.”

When asked about her place in the Sandpoint music scene, Pederson is quick to give love to the talented people she sees coming up: “I’m always so excited to see all the young people putting wonderful music out there. I feel like the grandma of it all.”

“Beth’s voice and her guitar playing are so intertwined, that you can’t really separate them out like you would with conventional recording,” said Bishop. “If you pull those two things apart, you lose something that’s really worth saving. The interaction between her voice and her guitar is subtle, but it’s huge – it represents a lifetime of work on her part.”

Catch Beth Pederson and Bruce Bishop at Di Luna’s Café for the release of their new album, “Keepin’ Time by the River,” on Wednesday, Dec. 14 at 7:30 p.m. Tickets are $12 in advance, or $15 the day of the show. Dinner service begins at 5:30 p.m. “Keepin’ Time by the River” will be availabe for purchase at Di Luna’s for $15, or online at www.highmoonmusic.com or www.brucebishopmusic.com.