Look out, it’s the Flying Mammals!

Hometown hero band Flying Mammals is certainly on the up-and-up with their soon-to-be-released album “Vier.” Meaning the number four in German, this album title marks the band’s fourth release. But it also commemorates the addition of Jeremy Birdsall, bringing the crew’s total to four mammal siblings.

Founded in 2010, the Flying Mammals have a comparable sound to “Imagine Dragons, Muse, The Killers, Incubus and the Red Hot Chili Peppers,” according to Reverbnation.com.

The original power trio—Aaron, Andy and James Birdsall—have showcased their talents across North America including venues such as the House Of Blues in Hollywood, The Knitting Factory in New York and festivals from Orlando to Anchorage. 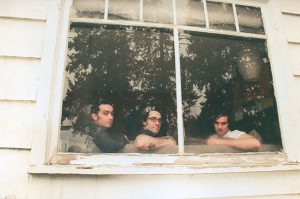 “Sandpoint seemed to be the last family home we had growing up,” said lead vocalist Aaron Birdsall, who graduated from Sandpoint High School in 1999. With his eight siblings of widely varying ages, he also grew up in Seattle and Chicago as the family moved around over the years.

With Jeremy joining up, you could call it a reverse-Jonas Brother effect. According to Aaron that’s nothing out of the ordinary for his childhood.

“It was normal in our house that somebody was randomly sitting down and playing the piano, and it was normal for someone to jump on the bench next to them and start playing or singing along with whatever they were doing,” he said. “… I didn’t know that was weird until I got into college.”

Throwing new talent into the mix will certainly make future live performances more dynamic for the band’s sound. It will also help with instrument efficiency on stage.

“The addition of the fourth member is going to allow us to do a lot interesting things, live especially,” said Aaron. “At any given time, I could not have to play an instrument and just sing. Or we could have two members on drums and Andy could jump out and sing. … So it lets us move around more and play more instruments. … Jeremy plays some instruments that we don’t, like the sitar, banjo bass and Chapman Stick … it just finally came down to the point that it was time.”

Maybe the most exciting development for the band is their partnership with Sylvia Massy, a big name in the music industry. She’s a world-renowned platinum producer and Grammy-winning engineer who has worked with the likes of Prince, Tool, Red Hot Chili Peppers, Johnny Cash, The Black Crows and the Beastie Boys during her extensive career.

The Mammals had just released their third album when they received the email from Massy saying she really liked their stuff and wanted to work together. Over the past three years, 70 or so new songs will now be narrowed down to around 12 to 15 for an album.

Collaboration with Massy is set for November at the Caste Rohrsdorf in Dresden, Germany, which has become a Mecca for artists to record. Built in the 14th century, this castle has everything a person could want: a bar, hotel services, sprawling gardens and more. According to the Castle Rohrsdorf website, the property offers musicians and artists “a unique location in which to record, write, stay and create. With its exceptional historic location, this property will be uniquely positioned as a experience destination for artists from across Europe and North America.”

It’s a musician’s dream recording studio containing everything from high end equipment to the nostalgic analogue gear everyone loves.

“It’s the most out of the blue, crazy awesome thing,” Aaron said of the recording opportunity. “It’s like telling a kid they get an extra birthday this year, and all their best friends are going to be there, and the one friend that died of small pox is coming back to life and actually going to be at this party.”

The band has a crowd funding campaign on IndieGoGo.com where pre-release copies of “Vier” are available for purchase along with other limited edition items related to the album.

For more info on the Flying Mammals you can check them out at Facebook.com/FlyingMammals or visit their website, www.FlyingMammalsBand.com