Every snow by its right name

The many terms we use to describe the snow we ride

Imagine you overhear someone saying to their friend, “It was nice on the corduroy, but off piste was nothing but dust on crust until it turned to Pend Oreille pre-mix near Stella.” If you’re a local skier or snowboarder, you know exactly what’s going on here, but if you don’t frequent the amazing ski hill right in our backyard, there’s a good chance this sentence sounds like hopeless jargon.

Like any other specialized sport, skiing and snowboarding brings with it certain lingo that helps participants define and share the experience. One common question when encountering someone who just came down from Schweitzer is, “What was the snow like?” 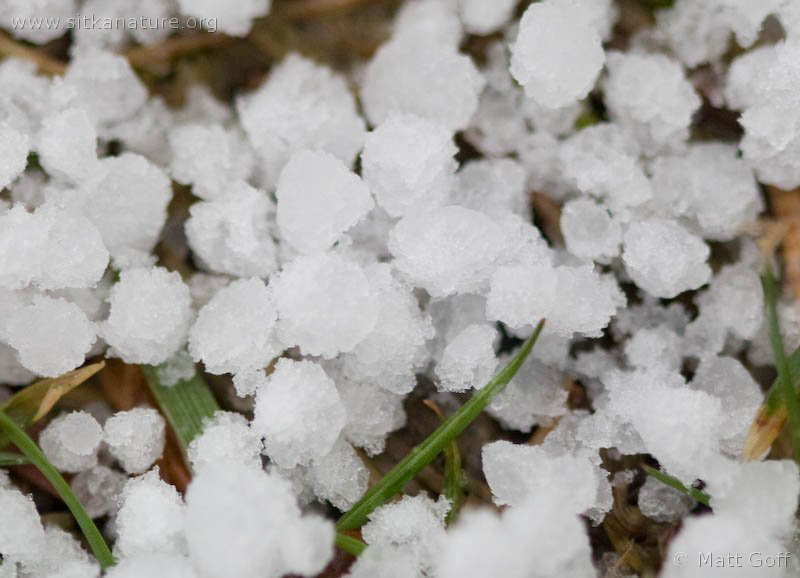 A close up view of what graupel looks like. Courtesy photo.

Over the years, I’ve heard many humorous descriptive terms that attempt to define exactly what the snow was like. Here are some of my favorites:

It snowed the night before, and the mountain is awaiting your fresh tracks. Call in sick for work.

A rare experience when a storm rolls through the day before, dumping snow all over the mountain, but by morning the clouds push off and a bright blue sky awaits your fresh tracks.

Ski resorts often use this term to denote they had a powder day the day before but now it’s been compacted and is a bit denser.

On a powder day, after thousands of skiers have sought out every nook and cranny of freshies, what’s left is a bumpy, choppy mess that can be like riding a bucking bronco down the mountain. It still beats a boring day at the office.

This is more common in ski resorts in places like Colorado, where the temperature is consistently lower due to higher elevation. Champagne powder days are uncommon in North Idaho, but when they happen it’s like Christmas morning. The snow is light, fluffy and chalky, often spraying in fine rooster tails when you surf through it.

This is a local colloquialism for when fresh powder turns to packed powder, then gets tracked out and what remains seems closer to skiing through wet concrete than snow. The pre-mix will grab your skis or board and do funny things with them. Best to stop and have a beer to make this run more enjoyable.

Similar to Pend Oreille pre-mix. Start with untracked powder, track it out and achieve pre-mix status, which then gets warmed by the sun and refreezes overnight to transform into crud, which is heavy, grabby and hard on the joints. The heavier and wetter the crud gets, the more inclined we are to call it mank.

Very dense, wet snow that only lets your skis or board sink in a few inches, but is smooth and buttery. Good spring skiing days often feature cream cheese snow.

When the temperature warms, it softens the snow a bit, but after it refreezes, we are left with a firm layer of crust on top with a softer layer beneath.

When a fresh snowfall of a piddling amount falls on crust, giving someone the illusion that the snow is forgiving. The inexperienced will barrel off the run into dust on crust and try to put an edge down, only to slide clear down the hill without stopping. Legend has it some are still sliding to this day.

After a groomer passes over the snow, it leaves a grooved pattern behind that resembles corduroy. There is a unique sound and feeling when riding the fresh corduroy.

Those beautiful carved wind erosion patterns that form in firm, wind-affected snow. They are terribly beautiful to look at, but just terrible when trying to punch through them.

Graupel is soft, hail-like snow that falls on occasion. Sometimes you’ll ride up a chair and enough will accumulate on your lap that it resembles a box full of mini packing peanuts. On the run, graupel can be a bit like skiing over chafed ball bearings. It’s grabby and odd, but it still beats being hit in the face with a fish.

When it’s snowing so hard you can ski the same run over and over again, and in the time it takes you to get back up in the chairlift, your lines are already filled in. Storm skiing is super fun, but visibility is often tough. Suck it up, buttercup — free refills can be some of the best days of the year.